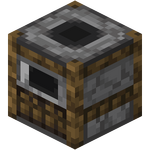 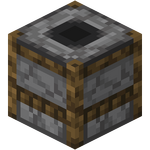 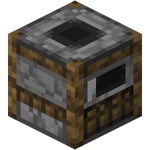 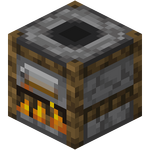 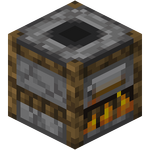 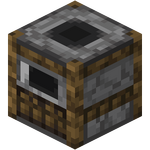 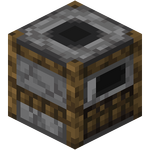 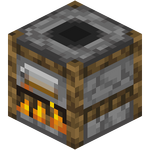 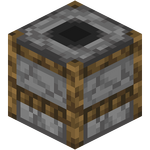 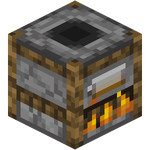 A smoker is a block that cooks food items, similar to a furnace, but twice as fast. It also serves as a butcher's job site block.

Smokers can be mined using any pickaxe. If mined without a pickaxe, it drops nothing.

Smokers can generate in butcher houses in villages.

Smokers cannot be pushed by pistons.‌[Java Edition only]

Smokers are used to cook food items twice as fast as a regular furnace. It is the counterpart to the Blast Furnace, which is used to smelt ores and metal tools and armor. When a food item and a fuel is placed into the smoker the block state changes to lit and the item cooks. Fuel is used at double the rate of regular furnaces, so the number of items cooked per fuel stays the same. The product can then be collected by pressing use on the smoker or by collecting the output using a hopper.

Smokers emit a light level of 13 when active, just like normal furnaces.

By default, the GUI of a smoker is labeled "Smoker", but this name can be customized by naming it in an anvil before placing it, or by changing the CustomName tag using the /data command‌[Java Edition only].

If a village has a smoker that has not been claimed by a villager, any nearby villager who hasn't chosen a job site block has a chance to change their profession to butcher.

Smoker can be placed under note blocks to produce "bass drum" sound, just as other stone blocks.

A smoker has a block entity associated with it that holds additional data about the block.

Issues relating to "Smoker" are maintained on the bug tracker. Report issues there.