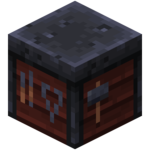 A smithing table is a toolsmith's job site block that generates in villages, and can be used to upgrade diamond gear into netherite gear. 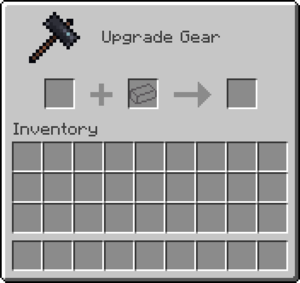 The UI for the smithing table.

Smithing tables are able to be obtained from a village or crafting.

Smithing tables can spawn naturally inside toolsmith houses in villages.

Smithing tables can be broken by hand, but using an axe speeds up the process.

Despite being crafted from iron ingots, smithing tables cannot be smelted to make iron nuggets.

If a village contains a smithing table that has not been claimed by a villager, any villager who hasn't already chosen a job site block has a chance to change their profession to toolsmith. If a villager with this profession has already been traded with, it can not change jobs.

In Bedrock Edition, smithing tables can be used as a fuel in furnaces, smelting 1.5 items per block.

Smithing tables can be used to upgrade diamond gear to netherite.

While doing so, the newly crafted netherite gear retains the enchantments, prior work penalty and number of durability points lost (instead of the remaining durability) from the diamond gear.

Unlike anvils, using a smithing table to upgrade diamond gear to netherite gear costs no experience and does not increase the prior work penalty.

Issues relating to "Smithing Table" are maintained on the bug tracker. Report issues there.