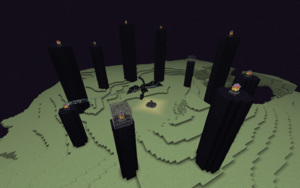 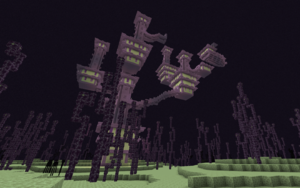 The End is a dark, space-like dimension consisting of separate islands in the void. 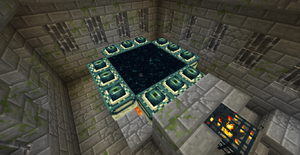 The player can activate the portal by placing 12 eyes of ender into the 12 end portal frames. Each frame block has a 10% chance of generating with an eye in it already, meaning the player may not necessarily use 12 eyes to activate it. Once all the eyes of ender are placed, the portal activates and emits a loud noise. As soon as it is activated, the portal destroys all blocks in the central 3×3 square, including bedrock or another portal frame, and replace them with the end portal blocks that can teleport an entity into the end dimension. Upon jumping into the portal, the player immediately arrives in the End along with any prior entities that may have teleported.

All players begin their exploration of the End with the main island. Unlike Nether portals, entering the end portal instantly teleports the player to the End, giving no time to back out. Upon arrival, in the end, the player materializes on a 5×5×1 obsidian platform with 3 layers of air blocks above it. The platform can generate on the island, within it, or at a short distance from it, close enough to throw an ender pearl to reach the island. It always generates centered on the coordinates (100, 48, 0) with the player facing west.

Once the player enters the End, the only way back is to die or defeat the ender dragon. The dragon spawns naturally and flies around above ten towers of obsidian arranged in a circle around the central Exit Portal, which fills up at the end of the battle. On top of each tower lies an end crystal, some of which are protected by cages of iron bars. These crystals heal the dragon, but can be destroyed by hitting it (even with projectiles). Destroying the crystal while the dragon is healing damages the dragon.

Once defeated, the dragon goes to the exit portal at (0, 64, 0), rises into the sky and disintegrates, with bright beams of light flashing from its body. It then explodes, drops 12,000 (first dragon) or 500 (all subsequent dragons) experience orbs, activate the exit portal, and generates one end gateway portal (first 20 dragons only). This gives the player access to the End's outer islands. Atop the exit portal lies four torches and the dragon egg. After killing the dragon, it can be respawned an unlimited number of times by placing four end crystals on the sides of the exit portal. Respawned dragons do not drop another dragon egg. 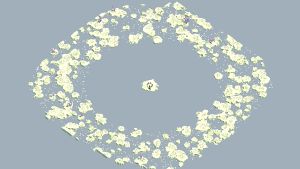 The End's outer islands are more diverse than the main island. When a player enters one of the End gateway portals that generate after killing the dragon, they are instantly teleported over the ~1000 block void to the outer islands. These gateway portals are easiest to enter through the use of ender pearls, due to the one block tall gap between the bedrock blocks, but can also be entered by placing water and swimming through, using a trapdoor or piston to force the player to crawl, or with skilled use of a pair of elytra. There are other ways of getting to the outer islands, such as flying the 1000 blocks with elytra and firework rockets (assuming the player already has elytra), making a piston flying machine, or even possibly making a 1,000 block long bridge; however these ways of crossing the void are extremely inefficient. In the Legacy Console Edition, the inner and outer islands are surrounded by barriers, meaning the only way to get through islands is through the end gateway.

These outer islands generate infinitely (until you reach the World Border), topped with a forest of chorus trees that may be harvested for its Chorus fruit, and perhaps Chorus flowers, to grow it in the Overworld. The player may find end cities (which may generate ships with them) on these islands, which hold valuable loot. Pairs of elytra and the dragon head can be found exclusively on end ships.

Other mobs except for the wither may be sent into the End through an end portal. (The wither can still be built in the End as usual.)

There are 5 biomes that make up the End in Java Edition; in Bedrock Edition all these biomes are classified as a single biome, which is the_end. in Java Edition, if the biome is set to end in the overworld, the sky will be a light gray version of the normal overworld sky. Beds will also still explode if the biome is set in the overworld. It is unknown if this happens in Bedrock Edition. 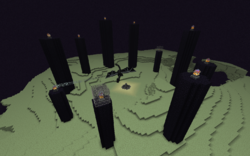 This biome is used to generate the circle of radius 1000 centered at the 0,0 coordinates in the End. The End central island is generated at the center of this circle, surrounded by emptiness all the way to the edge of the biome. Most of the End features are exclusive to that island, including the ender dragon, the obsidian pillars, the end crystals, the 5×5 spawn platform, the exit portal, and the 20 central end gateways. Large amounts of endermen spawn in this biome. Most of the End's structure is provided by the dimension itself rather than the biome. It does not rain or snow in this biome, unlike the other low-temperature biomes. The outer islands, in the End, can be accessed using the end gateway portal after the ender dragon has been defeated. If the biome is used for a superflat world, the sky appears nearly black, and only endermen spawn at night. 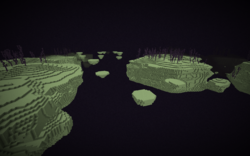 Small end islands use the same mob spawning chances as the end.

End midlands use the same mob spawning chances as the end.

End highlands use the same mob spawning chances as the end.

End barrens use the same mob spawning chances as the end.