From Minecraft Wiki
(Redirected from Slimes)
Jump to: navigation, search
This article is about the mob. For the block, see Slime Block. For the item, see Slimeball. For other uses, see Slime (disambiguation).
Slime 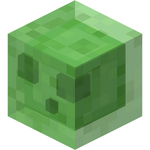 The slime chunk algorithm in Bedrock Edition is different from in Java Edition. The algorithm doesn't depend on the world seed, thus the chunks that slimes can naturally spawn in inhabit the same coordinates for every world.[2] 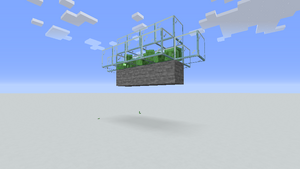 Slimes move by hopping, which they do every 10 to 30 ticks (1⁄2 to 1 1⁄2 seconds), and can swim in water and climb ladders and scaffolding. Unlike other mobs, slimes continue moving when no players are nearby. Their exact routine is as follows:

A slime's health is equal to its size squared, and its dimensions are 0.51 blocks times its size in each dimension. When a slime attacks, it deals damage equal to its size, except for size 1 (smallest) slimes. Small slimes do not prevent sleeping.

A slime's jump distance also depends on its size; a slime jumps a distance slightly farther than its length. When landing, several slime particles 1⁄8 its size appear.

Slimes have entity data associated with them that contains various properties.

Note: they can also spawn in the swamps, not only in caves