From Minecraft Wiki
Jump to: navigation, search
This article is about the item. For the mob, see Slime. For other uses, see Slime (disambiguation).
Slimeball 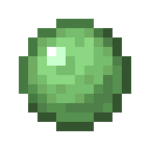 A slimeball is a crafting ingredient commonly dropped by slimes, and can be sneezed out by pandas.

If a slime's size is 1, it drops 0–2 slimeballs when killed. The maximum number of slimeballs is increased by 1 per level of Looting, for a maximum of 5 slimeballs with Looting III.

Baby pandas have a chance of dropping one slimeball when sneezing.

Wandering traders sometimes offer to sell a slimeball for 4 emeralds.

Note: The video is outdated, as slimeballs can now also be used to craft leads and slime blocks, plus they can now be obtained from baby pandas.

Issues relating to "Slimeball" are maintained on the bug tracker. Report issues there.