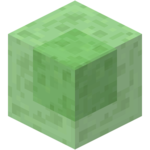 A slime block is a transparent block that stuff can bounce on. It is also used alongside pistons to move several connected blocks at once.

Slime blocks can be broken instantly, regardless of held items.

Landing on a slime block does not cause fall damage unless the player is sneaking.

Slime blocks are also slightly slippery, but less so than ice.

Slime blocks cause movement on top of them to slow down.

Most mobs bounce off slime blocks except for chickens, ghasts and bats. Occasionally a horse may get stuck on a block when a player tries to spawn it on top of a slime block in Creative mode.

Items, falling sand/gravel, minecarts and boats do not bounce on slime blocks. Particles, however, do bounce.

When a slime block is pushed or pulled by a piston, it attempts to move all adjacent blocks in the same direction. The types of blocks that can be moved are the same as those that can be pulled by a sticky piston. Blocks that cannot be pulled by a sticky piston (i.e. all the blocks listed on the table on the pistons page) stay in place. The blocks that are moved may in turn push other blocks. For example, a slime block sitting on the ground attempts to move the ground block underneath itself, which push additional ground blocks in the direction of motion just as if it were being pushed directly by a piston.

Glazed terracotta and honey blocks are exceptions; they do not move when adjacent slime blocks are moved.

When the adjacent block that is moved is also a slime block, that block attempts to move all its adjacent blocks. For example, a 2×2×2 cube of slime blocks may be pushed or pulled as a unit by a single piston acting on any of the blocks in the cube.

A slime block adjacent to a block that cannot be moved by pistons ignores the immobile block. However, if an adjacent block could be moved but is prevented by the presence of an immobile block, the slime block is also prevented from moving. This includes slime blocks being pulled rather than pushed, in which case the piston retracts without pulling anything. Liquids are an exception: they aren't moved, but neither do they stop a piston from pushing or pulling blocks into their space (usually destroying the liquid, and in a rare case displacing it through the piston).

Slime blocks are not pulled by a non-sticky piston, nor are they moved if an adjacent (non-slime) block is moved by a piston.

The maximum of 12 blocks moved by a piston still applies. For example, a 2×2×3 of slime blocks may be pushed or pulled by a sticky piston as long as no other movable blocks are adjacent to it.

A piston cannot move itself via a "hook" constructed of slime blocks, but self-propelled contraptions can be created with multiple pistons.

Issues relating to "Slime Block" are maintained on the bug tracker. Report issues there.