From Minecraft Wiki
(Redirected from Skygrid)
Jump to: navigation, search 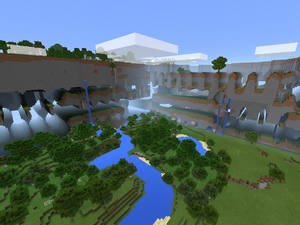 The X and Z Far Lands

The Far Lands[1] are a terrain generation bug in Bedrock Edition that happens millions of blocks from the world origin. It essentially forms the "edge" of an "infinite" world. 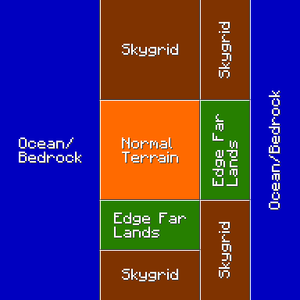 Map of the relative positions of the Far Lands. In the Overworld, Nothingness appears instead of the skygrid. (not to scale)

The exact structure depends on the platform. On Realms and Bedrock Dedicated Servers, the Far Lands generate the same as on Windows 10, Xbox One, and PlayStation 4: only the nothingness generates. On mobile devices and Nintendo Switch the Edge Far Lands may generate, depending on the coordinates. In multiplayer, the structure depends on the platform used by the owner of the world. In Education Edition, what happens at the Far lands depends on the world. Sometimes it is a skygrid, and sometimes it is a plain ocean/bedrock with different biomes. The features of the Far Lands in other Bedrock ports remain unknown.

Caves generated close to the Far Lands sometimes have an edgy "zipper" consistency, with sometimes only every second block being hollowed out.

Despite Y level 256 being the maximum build height, the Far Lands are still cut off at Y=128, although trees still generate normally. (as the terrain generator is limited to Y=128 despite the 256 height limit)

If fossils generate here, they usually generate in mid-air without touching any block.

Warm and lukewarm ocean biomes in the Edge Far Lands appear as a "desert-like" patch, without any water in it, while normal and cold oceans generate grass blocks. Shipwrecks and underwater ruins always generate above ground, sometimes higher than 128 on the Y axis. Buried treasure sometimes generates without touching any block.

There are many distinct terrain types of Edge Far Lands, listed in the table below:

Certain structures are able to generate in this area. Several, such as desert temples, have elongated foundations when generated here. Jungle temples here do not have a foundation; they instead appear to float above the water. Fossils can generate underwater, but do not generate on the bedrock floor. Igloos generate underwater on the bedrock layer, replacing the bottom bedrock layer with stone bricks. Underwater ruins and shipwrecks always generate on the bedrock layer, and lava veins (with magma blocks, obsidian, and stone on top) still generate near the bedrock layer, often creating bubble columns. Buried treasure generates above water. Pillager outposts generate only the watchtower without any peripheral structure around it; however, although the pillagers fall into the void, new pillagers can spawn again and again (infinitely) in and around the watchtower. Village buildings generate on a floating platform of grass below them. Iron golems spawn without falling through the world, although they cannot move.

In the frozen ocean biome, the surface of the ocean still freezes, and icebergs can still generate. Polar bears can spawn without falling into the void.

Note: As of 1.16.0, the skygrid generates only in the Nether and the End. In the Overworld, all areas previously occupied by skygrid are instead occupied by nothingness.

In the Corner Far Lands, Far Lands with negative Z, and past the normal positive Z Far Lands, a 3D grid pattern of grass blocks appears instead of the ordinary stack/loop. Tall grass and trees generate on these blocks. This results in a perfect three-dimensional array of grass blocks levitating high above the ocean.[2] The name is a bit misleading, since the array of blocks extends not only up to Y=128, but also down to bedrock level. Structures generated here follow similar rules to that of the Nothingness with some differences:

Bedrock Edition uses 32-bit floating-point numbers (as opposed to 64-bit on Java Edition). At any given coordinates, even near the world origin, attempting to move is impossible if it is too slow. At every power of 2, the "minimum speed" doubles.

The player's hitbox corners are stored individually in memory (as opposed to the coordinates of the actual player in storage). If the player is at a power of 2, the hitbox corners may move at different speeds, changing the size of the hitbox. These size changes are usually negligible, but can potentially be significant. In extreme cases, the player's hitbox size reaches 0, making it possible to fall through the world.[3]

The Nether Far Lands are similar to the Overworld Far Lands, except generated with Nether terrain features, with a lava ocean at Y=31. Bastion remnants and ruined portals continue to generate. Bastions "float" on the lava, with their foundations at Y=29.[5]

The End Far Lands are not of much interest, being made of almost exclusively end stone, and appear a bit more squashed and stretched horizontally than the Overworld Far Lands. Micro-end islands still generate inside the Far Lands, even after the latter dissipates. Since there is no signature liquid of the End, they just generate down to a dry void; similarly, there is no bedrock floor.

The End Far Lands are cut off at y=128, although structures still generate on top.

The world at excessive coordinates is not supported, and as such issues related to the Far Lands may not be fixed. This is because such issues would affect only players who intentionally teleport to high coordinates, and they are difficult to fix because they are a limitation of the game engine itself.[6]