From Minecraft Wiki
(Redirected from Skins)
Jump to: navigation, search

This article is about custom player skins. For world textures, see resource pack.

Skins refer to the textures that are placed onto a player or mob model.

Skins are divided into areas that act as the surface area of the character (for example, the front head area, left leg area, etc.). A skin will only allow solid color; transparency is not allowed on the skin file except on the second layer, which is transparent by default; playing offline, pixels can be left free resulting in "holes" in the skin. If a skin with transparent pixels on the first layer is uploaded, the transparent pixels will render as black pixels in-game. The second layer can be used to give the character glasses, hats, or other accessories (even a bigger head).

A skin can also refer to other textures in the game, such as block textures, item sprites, mob skins, etc. A list of these can be found here.

In order to use the player skin for zombies and zombie pigmen, the user must align it to the correct place on the .png or the texture will be broken.

A player can only change their character's skin if they have purchased Minecraft. This is done on the profile page by uploading a valid .png or .jpg image file, which will then replace the default skin.

Skins also have the option of having 3 or 4 pixel wide arms, which can be changed on the profile page as well.[1]

The steve.png and alex.png files in minecraft.jar can also be changed and replaced via a resource pack, but the effects will only be visible to players using the resource pack, and will affect all players with the default skin.

There are currently 18 default skin types (with the exception of the skin packs), 9 of which are based on the Steve model and the other 9 based on the Alex model, wearing different outfits and skin colors. The skins are available to be chosen in the 'Change Skin' area of Help & Options. There are also a few other skins with the name of Alex or Steve, but they aren't default, such as developer Alex or party Steve. The Legacy Console Edition allows transparent skins, because the player cannot create their own skins. This prevents issues with completely transparent skin users "haunting" other players. The player can add custom skins to the Legacy Console Edition via hacking; however, this will void the warranty of the console, and the player risks a ban from either Xbox Live or PlayStation Network for an illicitly modded game or console.

Other versions of Steve and Alex in officially-released skin packs exist:

Since Pocket Edition Alpha 0.11.0, players can choose one of the two default skins either Steve or Alex, and can apply their own custom skin. (Uses the same format as the Java edition). The player must select a valid skin image from their photo library, and will then be prompted to choose between the two main models. Players can also buy skin packs which are purchased with Minecraft Coins. The Legacy Skin Pack was also implemented in Bedrock Edition, but the player has to sign in to Xbox Live to access all the skins. It also includes five anonymous skins. Players can also make their own skin packs, which must include a manifest.json file, a skins.json file, and all the desired skins. An additional .lang file can be added inside a folder labeled texts to display the skin names, but the game can register the skins without it.

In addition, Bedrock Edition has the option to use skins with double the resolution of a normal skin. This means the skin template can be up to 128x128 instead of just 64x64. The normal templates still apply, but players get 4x the amount of pixels to work with, since both dimensions have been doubled. Transparency can be used, even on the first layer, though there needs to be at least one visible pixel on five body parts, so a fully invisible skin can't be made. The transparency must also be 0% or 100% as translucent colors are not allowed in either layer. 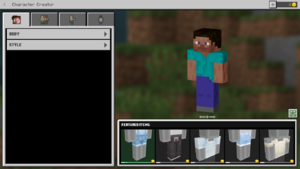 The character creator is a feature exclusive to Bedrock Edition that allows players to customize their skins with the use of free and paid cosmetics.

One example of a skin pack available in the Legacy Console Edition.

Skin Packs are available in Bedrock Edition as downloadable content. Skin Packs add additional skins that players may choose from along with the 2 default skins packaged with the game. They often feature characters from other video games, alongside original designs.

A custom skin is a way to personalize the player model and can be done either by using a variety of community-made skin editors, or by editing the steve.png or alex.png file manually with an image editor like Photoshop, GIMP, Paint.net or similar image editors. The steve.png file can be downloaded here and the alex.png file here. When editing the steve.png or alex.png file manually, be sure to keep the original image dimensions and make the background of the skin (the unused pixels) completely transparent. Otherwise, Minecraft may fail to recognize the skin as intended.

Alternatively, some may find it easier to use a program, either downloadable or in-browser, which will allow them to have a live view of their character on a three dimensional model as they are editing the skin. For example, programs may further assist players by providing them with a wide variety of pre-made selections (such as hats, boots, sweaters, etc.), to give the skin creator exactly what they want, even if the creator has little to no artistic skill.

After making a custom skin, either by using a skin editor or by editing the steve.png file directly, one will still need to upload the .png file at the Skin section of the Profile page on Minecraft.net (found here) before the skin is applied. Other players in multiplayer will also be able to see this skin. Note that players will not be able to see the custom skin if they are not logged in or when playing offline.

Note: The Java Edition 1.8 templates can be used for pre-1.8 skins on the skin server. Only the top half of the image is used, e.g. not the individual arms and legs on the bottom, and no overlay on any layer except the head. If the skin is for Java Edition 1.7, the old system must be used exactly.