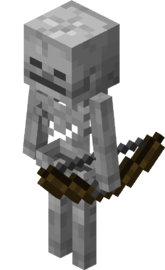 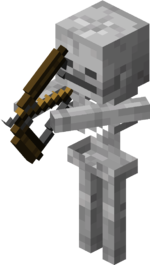 Skeletons can spawn in the overworld at a light level of 7 or less, in groups of 1-4. 80% of skeletons spawned directly under the sky spawn as strays in Snowy Tundra, Snowy Mountains, Ice Spikes, Frozen River, Frozen Ocean, and Deep Frozen Ocean biomes.

Spiders have a 1% chance to spawn with a skeleton riding them, creating a spider jockey.

Skeleton horsemen spawn when a skeleton trap is triggered. The skeletons ride on skeleton horses and are equipped with enchanted bows and iron helmets, and have damage immunity for 3 seconds after spawning.

Skeletons spawn in groups of 1-2.

Only skeletons and strays spawn naturally in those frozen biomes.

Skeleton horsemen do not have damage immunity. Skeletons, in general, are immune from lightning bolts.

Skeletons spawn from 25% of the spawners found in dungeons.

Skeletons can even spawn in The Nether. Some of them may spawn in fortresses, replacing 20% of wither skeletons.

In the Soul Sand Valley biome, they spawn in groups of 1-4‌[Java Edition only] or 1-2‌[Bedrock Edition only], at a light level of 7 or less. 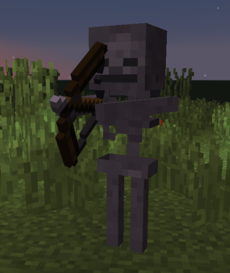 Skeletons chase players they see within 16 blocks. They climb stairs, navigate mazes and traverse other complex obstacles to get within shooting range. When within 15 blocks of a target, with a clear line of sight, they start shooting with arrows, one arrow every 2 seconds or 1 on hard difficulty. Strafing in circular patterns to dodge attacks, they retreat to a safe range if the player comes within 4 blocks. They are able to climb ladders, but only if they are forced to.

The detection range of skeletons is reduced to 8 blocks while the player wears a skeleton mob head.‌[JE only]

The skeleton's accuracy is based on the difficulty. Skeletons have an "error" of 10 on easy, 6 on normal and 2 on hard. This is compared to the player's lack of accuracy of 1. To account for gravity, skeletons aim 0.2 blocks higher for every block horizontal they are from. 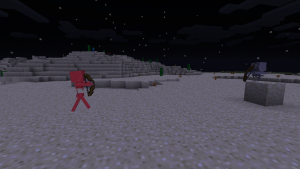 Dueling skeletons. One skeleton turned red from being shot by the other skeleton.

If their arrows hit most monsters, the mob attacks the skeleton, if it was not hit by a player first. When a skeleton is attacked by other mobs or even another skeleton, it attacks that mob, reorienting on the player once the mob is dead.

Skeletons sink in water and are unable to swim, but do not drown. They can continue shooting underwater, but the water slows down their arrows.

If spawned with no weapon at all (which can be spawned with /summon skeleton ~ ~ ~ {HandItems:[{id:air,Count:1b}]}), a skeleton comes at players with arms outstretched and damages by touching them.

Skeletons holding tipped arrows in their offhand always shoot that type of arrow; these arrows are not consumed.

When its target is closer, a skeleton shoots faster but deals less damage. They make no attempt to avoid being hit. An underwater skeleton uses a melee attack to attack its target whereas unable to use bows. 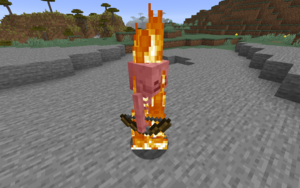 Skeletons burn at dawn when the sun is 15 degrees or greater above the ground (when the moon can no longer be seen) unless the skeleton is:

If not wearing a helmet, it seeks out shade during the day or enters water to protect itself. Unlike zombies, which leave the shade to chase a player, skeletons do not exit the shaded area even while attacking.

A burning skeleton has a 50% chance of shooting flaming arrows if the regional difficulty is 3 or greater. 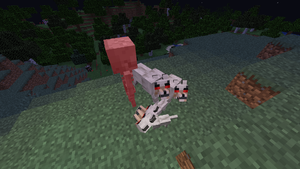 Skeletons flee from wolves. A skeleton runs from a chasing wolf until the wolf deals damage, after which the skeleton turns to shoot at the wolf that successfully attacked it.

Skeletons shoot at nearby iron golems and baby turtles.

Snow golems are targeted in Bedrock Edition, as well.

Skeletons are ignored by the wither and are affected by the Smite enchantment.

Some spawned skeletons have the ability to pick up dropped items from the ground. If a picked up item is armor, a carved pumpkin, a jack o'lantern, or a mob head, a skeleton equips itself with the item. If the picked up item is a weapon or tool, the skeleton uses the item as a melee weapon.

Skeletons spawn already-armed with bows, which may be enchanted. The chances of that event are listed below from code. If a skeleton spawns wearing multiple pieces of armor, the armor is never mismatched (all pieces are made of the same material).

If a skeleton does spawn with armor, the chances of specific armor are as follows:

In Java Edition, the armor pieces go from feet to head, and in Bedrock Edition, they go from head to feet.

Skeleton armor is not damaged from most damage sources; it cannot "wear out" the way player armor does. Helmets (not blocks like carved pumpkins) on skeletons can break if the skeleton is exposed to daylight or has an anvil or other falling block dropped on its hitbox.

If multiple viable items exist, the skeleton endlessly picks up and drops the items. This feature has been intentionally programmed into the game.[1]

In Java Edition, during Halloween (October 31), skeletons have a 22.5% chance of spawning wearing a carved pumpkin and a 2.5% chance of spawning wearing a jack o'lantern. If these skeletons are killed using a tool enchanted with Looting, the pumpkin or jack o'lantern can drop with a chance equivalent to the level of Looting (up to 100 percent chance with Looting III).

Skeletons have entity data associated with them that contain various properties of the mob.

Issues relating to "Skeleton" are maintained on the bug tracker. Report issues there.