Shields are used for blocking incoming attacks. Using‌[JE only] or sneaking‌[BE only] causes a player to slow to a sneaking pace, and after 5 game ticks (0.25 seconds), attacks coming from in front of the player are blocked, dealing no damage. When the shield blocks an attack of 4

or stronger, it takes durability damage equal to the strength of the attack rounded up.

Most Blocked projectiles that carry status effects (such as shulker bullets‌[JE only], flaming arrows, or tipped arrows) do not affect the blocker. Tridents & arrows can be deflected into other targets. Knockback from melee attacks and projectiles is prevented, while knockback from explosions and ravager attacks is significantly reduced.

The shield directionally blocks all attacks coming from within 90° of the direction the wielder is facing, providing a full hemisphere of coverage to them. If the wielder faces straight up or straight down, they are likely to miss their blocks. 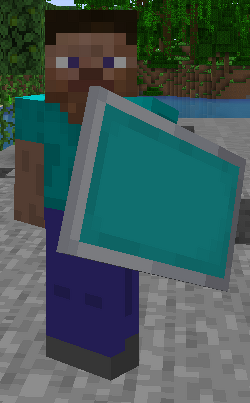