This article is about the level generation seed. For other uses, see Seeds (disambiguation).

Minecraft seeds are values made up of character(s) (including negative or positive integers) that are used as the basis for generating every Minecraft world.[1]

Seeds are not compatible across editions, but are sometimes compatible with the older and newer versions. However, after Village & Pillage, the villages and other generated structures changed.

Java Edition seeds between Alpha 1.2.0 and Beta 1.7.3 are mostly the same. Beta 1.8 changed world generation completely and Release 1.2 changed locations of land biomes with the addition of jungles. Release 1.7.2 rewrote the world generation entirely, making seeds from 1.2 through 1.6.4 outdated. 1.13 featured changes to cave generation and new aquatic biomes and adjustment to mutated biome locations. 1.14 included the new bamboo jungle biome and shifted some structures around. Not mentioned are structure additions in several updates throughout, but the addition of a generated structure usually does not require a complete change of biome generation.

In Bedrock Edition, the Alpha 0.9.0 update was the only update to overhaul world generation. Oceans were changed in the Update Aquatic, and villages & other structures were changed in Village & Pillage.

Whenever the game has to generate a new world, it calls upon an algorithm. This algorithm outputs a pseudo-random value that is then used to determine the characteristics and features of the world. However, the algorithm always outputs the same value each time for a constant starting point (seed). This is why seeds exist — to generate entirely different worlds, consistently each time, from single values.

A world's seed is set when that world is created. By default, it is decided automatically, but it can also be set manually. Set and reuse a seed to replay that world, or use a known seed to play the same world as another player. Either a number or a word/phrase can be used, including negatives. If a word/phrase is used, it is converted into a 32-bit integer.

Whenever the world generation algorithm is updated (usually by adding new biomes to the game), the same seed no longer generates the same terrain. This is why in some different versions of the game, the same seed does not produce the same world. If the seed or generator changes in a saved world, new chunks are based on the new seed and no longer match those from the old seed. In Java Edition, major (terrain-breaking) changes were observed with Alpha v1.2.0, Beta 1.8, and 1.7.2. Deleted chunks can regenerate if the seed and generator remain the same, but changes if either the seed or generator changes. In fact, deleting chunks is sometimes done to let newly-introduced features appear in an old world; see Tutorials/Updating old oceans in 1.13 using MCEdit.

Because seeds are simply random values read into an algorithm and not actually names of different worlds, using a certain seed does not result in a world with any relevance to the value of that seed. For instance, using a biome name as the seed does not necessarily result in the creation of a world with primarily that biome, nor does it spawn the player within the said biome. 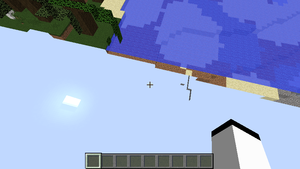 A dark forest not being completely rendered.

Broken world generation is when chunks do not load properly and cause certain blocks to not render. Certain seeds can cause the world generation to duplicate chunks in the x or z axis due to Java's Math.random() function returning 0. Chunks are invisible (see § Trivia)

In Java Edition, the player can enter the command /seed to view the world's seed.

In Bedrock Edition, the seed can be found on the world options screen. There is also a seed picker that offers the player several pre-set seeds to generate worlds with specific features near the spawn point. Additionally, the beta version has a visible seed on the top of the screen.

If the seed contains characters other than numbers or is longer than 20 characters, the Java String.hashCode() function is used to generate a number seed. This restricts Minecraft to a subset of the possible worlds to 232 (or 4,294,967,296), due to the int datatype used. Number seeds or a default world seed must be used to access the full set of possible worlds (264, or 18,446,744,073,709,551,616). There are still only 248 meaningful seeds since Java's Random only uses 48 bits of the seed; seeds are equivalent to one another modulo 248.

Bedrock Edition has a total of 232 (or 4,294,967,296) possible worlds no matter whether strings or numbers are used as the seed. This is because Bedrock Edition uses a 32-bit variant of the Mersenne Twister PRNG, which accepts only 32-bit seeds. The hashing algorithm is identical to String.hashCode(): a hash h starts with 0, and for each character c, the value of h is changed to h * 31 + c, within the boundary of a 32-bit integer.

The numeric entry for Minecraft seeds does not allow the number "0" (zero), as the game interprets "0" as a character, hashing it to its ASCII value of 48. However, by using a text seed for which the Java String.hashCode() function returns a zero value, the "zero seed" can still be used. Word strings that produce a zero seed include creashaks organzine, pollinating sandboxes, little jungle, small skeleton, and drumwood boulderhead.[2] However, any text that hashes to 0 works, such as ddnqavbj and 166lr735ka3q6. Numeric seeds that are congruent to 0 modulo 248 (such as 281474976710656) will also generate the same terrain as seed 0, but will not display as 0 using /seed.

In Bedrock Edition, the game rejects all numbers from -9 to +9. However, changing the last character of the seed by one also changes the output hash code by one, so to arrive to a value of +2 from small skeleton, the last letter is advanced two positions to become small skeletop. The shortest version is still ddnqavb, followed by any other letter from a through s. 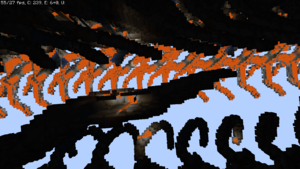