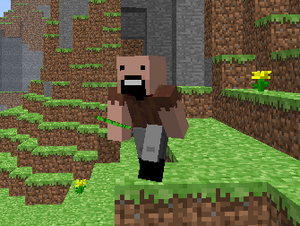 Notch sneaking, a function added in the final Seecret Update.

The Seecret Updates were a series of ten updates released by Notch during the Infdev and Alpha development stages of Minecraft, often without announcement. They were named after the day of the week on which they were released: the first nine Seecret Friday Updates were released on Fridays from June 18 to September 10, 2010, and the tenth Seecret Saturday Update was released on Saturday, September 18, 2010. Seecret Updates usually included major new features: minecarts and boats, redstone, and sneaking were all introduced in these updates, along with a number of other significant features.

Seecret Updates were discontinued before the Halloween Update; Notch tweeted on October 7 that they were "postponed until we know what to do with them" and that he was "focusing on the Halloween update and lawyers".[7] The last mention of them on The Word of Notch was in a blog post made on September 24, where he wrote "I'd really like to do a Seecret Friday update, both to keep you guys happy and to actually get to do some programming myself, but I need to wind down",[8] and the last time he tweeted about them was on November 10, where he wrote "I liked the Friday updates, but Saturday fixes suck."[9]