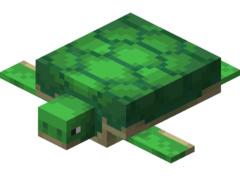 This article is about the mob. For the wearable armor-like item, see Turtle Shell.

A turtle is a common passive mob that moves both on land and in water.

Turtles typically spawn on sand in the Overworld on beaches with daylight, but not in its snowy variant or stone shores, occasionally in small groups of up to 5 individuals.

In Java Edition, Turtles spawn at light levels greater than 8 below 4 blocks above sea level (typically 62), on sand.

In Bedrock Edition, turtles spawn in groups of 2-6, at light level 7 or higher, at altitude 60-67. They also take a few minutes to lay eggs.

Turtles can both move around on land and swim in water. They move slowly on land, but they can swim at a fast speed in water. Like other passive mobs, they move around aimlessly and flee when attacked. When on land, they generally attempt to move to the nearest water source with direct sky access. When in an enclosed area, such as a player-made enclosure, they generally swim in circles if water is in the area, and rarely go on land to explore, if there is any.

Turtles can be picked up by boats‌[Java Edition only] and minecarts.

Baby turtles are attacked by the following mobs:

Feeding two turtles seagrass causes them to enter love mode, causing one of the turtles to have eggs in its inventory and appear a bit bigger (about .2 of a block) than normal turtles. The pregnant turtle then travels back to its home beach, which is where it first spawned. Upon arrival, it seeks a nearby sand block on which to lay its eggs. The turtle digs vigorously for several seconds a few times - with pauses, on top of the sand, and then lays 1–4 turtle eggs. The pregnant turtle can breed again immediately after laying the eggs while the other turtle can mate immediately after mating. On Bedrock Edition turtles have a 90 second cooldown between breeding.

Eggs can be placed on sand and red sand in clusters of up to 4. Using an egg on the sand places a single egg, and using an egg on an existing egg cluster of size <4 adds that egg to the cluster. Eggs can be destroyed by jumping on them, hitting them, walking over them or dropping items on them. They are destroyed one at a time (decreasing the cluster size). A turtle can walk on the eggs without breaking them. Harvesting eggs with Silk Touch drops an egg, which can land on the remaining eggs, breaking one of them.

Turtle eggs go through 3 stages before hatching into baby turtles, each stage taking a random amount of time according to received random ticks. Turtle eggs hatch only on sand and red sand, during both day and night, though the eggs grow 500 times faster during the night than during the day.

With a height of 0.12 blocks, baby turtles are the smallest mobs in the game. Baby turtles are small enough that when they walk on soul sand, they are entirely within the space at the top of the block and therefore suffocate in it, much like endermites and silverfish.

The growth of baby turtles can be accelerated using seagrass. Each use reduces the growth duration by 10%, as well as slowly increasing their size by about .01 of a block. Upon becoming an adult, the turtle drops a scute.

Turtles have entity data associated with them that contains various properties.