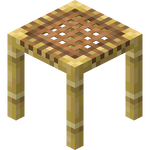 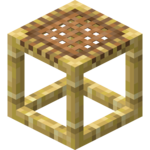 Scaffolding is a block used when building structures to help the player reach higher places, or to descend safely without taking fall damage.

Scaffolding is broken instantly, and no tools are required. Scaffolding requires support and drops as an item if it loses this support.

In Bedrock Edition, scaffolding takes a small amount of time to break, but no tools are required either.

When the bottom block of scaffolding is destroyed, all scaffolding blocks above it break, similar to chorus plants; this makes it easier for players to make temporary structures.

Scaffolding has no collision detection. The player can climb up or down by jumping or sneaking respectively. A scaffolding block can be moved by pistons, allowing them to be broken easily. 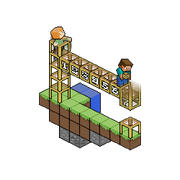 A diagram showing that scaffolding can be placed up to 6 blocks away from the base of support.

Scaffolding can be placed up to 6 blocks out from its base of support; any further scaffolding placed falls to the ground.

In Java Edition, scaffolding can be placed inside lava but burns after some time.

When holding scaffolding, the hitbox of scaffolding in the world is a full block.‌[Java Edition only] Otherwise, a player can interact with other blocks through the scaffolding.

This page would benefit from the addition of more images.
Please remove this notice once you've added suitable images to the article.
The specific instructions are: Scaffolding during Bedrock beta 1.8.0.8 as the blocks didn't have a 3D mesh originally.

Issues relating to "Scaffolding" are maintained on the bug tracker. Report issues there.