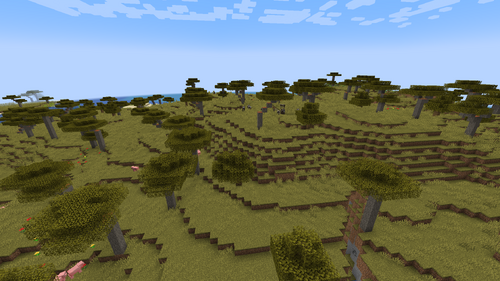 A savanna biome with an ocean in the background.

The savanna is a common warm biome. It typically generates bordering a desert or plains biome, and has four variations total.

Savannas are mostly flat biomes, with vast amounts of tall grass all over the terrain. Acacia and small oak trees are the two types of trees that grow here; this is the only place where acacia trees naturally generate.

Villages that generate in savannas are made mainly of terracotta, acacia logs, and planks; the bright-orange acacia planks make savanna villages easy to spot from a distance. Lakes generate infrequently.

Horses, donkeys, and llamas spawn in savannas. This does make it the only biome where both horses and llamas can spawn together. As the savanna has an arid climate, it never rains here, and thus lightning can never naturally strike; however, overcast skies (and daytime hostile mobs spawning in the case of thunderstorms) still apply. Grass and leaves in the savanna take on a dull, olive-green color, giving an illusion of warmness.

Survival in the normal savanna, along with its plateau variant, is generally easier than other biomes. The acacia and oak trees provide a decent source of wood, tamed horses can allow for fast travel and outrunning hostile mobs, tamed llamas can serve as useful pack animals, and villages can serve as a refuge and a way to trade items. However, the vast amounts of tall grass can prove to be a nuisance when building a shelter; additionally, it may serve as an obstacle when fighting hostile mobs, as the player might end up hitting the grass rather than the mob. Survival in the shattered savanna variant, however, is dangerous even for experienced players, due to the extremes of the generated mountains.

Savanna biomes are fairly common, often next to plains and desert biomes.

This is the standard and most common savanna variant. It is a flat, low-elevation plain with scattered trees. Villages may generate here.

In Java Edition, savanna plateaus use the same mob spawning chances as savannas for ambient and hostile categories. As for the others:

In Bedrock Edition, savanna plateaus use the same mob spawning chances as savannas.

The rare Shattered Savanna variant features arguably the most chaotic terrain in the game, a contrast from the otherwise flat savanna. The terrain is covered with some coarse dirt patches, bright green grass patches, and stone patches. It is full of extremely steep mountains, enormous overhangs, floating islands, and huge waterfalls and lavafalls, with higher and rougher terrain than even the mountains biome. In Java Edition in many cases, the mountains can go past Y-level 200 and even reach the world height limit, even without the Amplified terrain option. Horses cannot spawn and villages and pillager outposts cannot generate in this biome, though llamas and other passive mobs remain prevalent on the cliffs, and trees can still grow. Enormous deep lakes often form on the bases of the mountains. The steep generated mountains make this variant almost entirely unsuitable for shelter, and even just exploring quite hazardous, due to the sharp cliffs often risking fatal fall damage if not above water. Additionally, the giant overhangs often reduce skylight on the terrain below them, not only enough to spawn hostile mobs in daylight, but to produce complete darkness similar to caves, further adding to the difficulty of this biome.

Shattered savannas use the same mob spawning chances as savannas.

Like the normal Shattered Savanna, the Shattered Savanna Plateau variant features steep mountains, cliffs, and overhangs, making it a treacherous place to explore. Though nearly indistinguishable from the regular shattered savanna at first glance, the shattered plateau's terrain is slightly gentler, though still often risks fatal fall damage if not above water. The giant lakes characteristic of the regular shattered savanna does not generate here either.