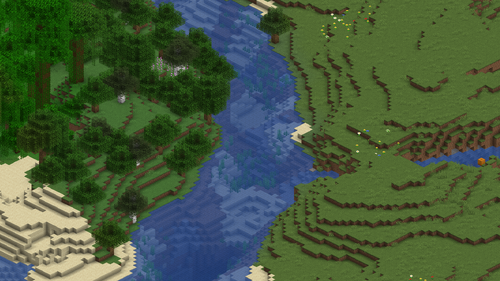 A river is common technical biome. Rivers serve as borders between various other biomes, and usually lead to oceans, although they can also form loops.

Rivers are thin, lengthy biomes that frequently generate across the world. They typically serve as a division between two different biomes, but can also split a single biome in two. They are filled with water up to sea level, though rivers may run dry in certain areas due to higher than usual elevation. Exposed grass in rivers takes on a bluish-green hue. Riverbeds consist of dirt, sand, gravel, and clay, and are one of the few places where clay generates, alongside lakes, swamp marshes and ocean hilltops. Seagrass generates atop the riverbed, and sugar cane occasionally generates on the riverbank. Neither passive nor hostile‌[BE only] mobs (except drowned) spawn within river biomes themselves, but frequently wander into them from the surrounding biomes if they can spawn there. Drowned can spawn underwater, as can salmon and squid.

When generated between two high-elevation biomes, such as mountains and hills, river biomes may pose a fall damage hazard, but are otherwise mostly harmless.

If this biome is used to generate a buffet world, it appears as a shallow ocean, of no more than 10 blocks deep, with mostly sand, dirt, clay and gravel floor and infrequent grassy islands that rarely contain oak trees and, more rarely, pumpkins.

There are two different river biomes.

The standard river variant. Salmon and squid may spawn here. This is the third most common biome in the game, only behind Plains and Forest.

Frozen Rivers replace regular rivers, and generate only within snowy tundra biomes. As the name implies, the top layer of water is entirely frozen, though below the ice is the usual sand, gravel, and clay, though seagrass does not generate on the riverbed. While sugar cane can generate alongside a frozen riverbank, it quickly uproots itself after generation due to the water being frozen.

In Bedrock Edition, along with salmon and drowned, strays, rabbits, and polar bears can spawn in frozen rivers. No other hostile mobs can spawn, even underground.

Frozen rivers can cut through snowy tundra only, not its variants; a river that separates the snowy tundra from any other biome is only partially frozen.

In Java Edition, frozen rivers use the same mob spawning chances as rivers for water and ambient categories. As for the others:

In Bedrock Edition, frozen rivers use the same mob spawning chances as rivers for water categories. As for the others:

This section is missing information about Legacy Console Edition.
Please expand the section to include this information. Further details may exist on the talk page.