This article is about the block. For repeater circuits, see Transmission circuit § Repeater. For other topics related to redstone, see Redstone (disambiguation).

A redstone repeater is a block used in redstone circuits to "repeat" redstone signals back to full strength, delay signals, prevent signals moving backwards, or to "lock" signals in one state.

A redstone repeater can be obtained by crafting, by looting jungle temples, or by breaking a previously-placed repeater.

A redstone repeater is removed and drops itself as an item if:

A redstone repeater generated in the jungle temple's hidden room.

A single redstone repeater is generated naturally in each jungle temple.

A redstone repeater can be used in four different ways: to "repeat" redstone signals back to full strength, delay signals, prevent signals moving backwards, or to "lock" signals in one state.

A redstone repeater has a front and back – the arrow on the top points to the repeater's front. A repeater also has two small redstone torches on its top – the color of the torches indicates whether its output is on (dark red when off, bright red when on) and the distance between them indicates the delay the repeater adds to the signal transmission.

A repeater transmits signals only from its back to its front, but its behavior can be modified from the side (see signal locking, below).

Different ways to power a repeater

A redstone repeater can be powered by any of the following components at its back:

A redstone repeater can power any of the following components at its front:

A redstone repeater can activate any mechanism component it is facing.

A redstone repeater can "repeat" a redstone signal, boosting it back up to power level 15.

Redstone signals have a maximum power level of 15 and that level drops by 1 for every block of redstone dust the signal travels through. If a signal must travel through more than 15 blocks of redstone dust, a redstone repeater can be used to boost the signal back up to full strength. An extra two blocks of distance can be achieved by placing solid opaque blocks before and after the repeater.

While redstone repeaters can allow signals to travel great distances, each always adds some delay to the transmission since the minimum amount of delay is 1 redstone tick (0.1 seconds, barring lag).

When initially placed, a redstone repeater has a delay of one redstone tick (equivalent to two game ticks, or 0.1 seconds barring lag).

A repeater set to a delay of two to four redstone ticks increases the length of any shorter on-pulse to match the length of the repeater's delay, and suppress any shorter off-pulse. For example, a repeater set to a 4-tick delay changes a 1-tick, 2-tick, or 3-tick on-pulse into a 4-tick on-pulse, and does not allow through any off-pulse shorter than 4 ticks.

Although a repeater cannot be set to have a delay of zero, instant repeater circuits are possible (circuits that repeat a signal with no delay).

(In Bedrock Edition, the first repeater have a delay of zero but the repeater is still showing 1-tick[more information needed]) 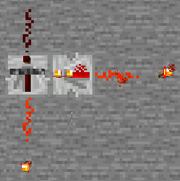 The left repeater has been locked in an unpowered output state by the right repeater.

A repeater can also be locked by a powered redstone comparator facing its side. This offers additional possibilities for locking signals because a comparator's output can be affected from 3 sides as well as by containers.

If a repeater is locked again too quickly after unlocking (e.g. the lock is controlled by a fast clock circuit), or the lock and the input are changed only on the same tick (e.g. because they're fed by the same clock and both repeaters have the same delay), the repeater does not switch states.

In Bedrock Edition, a redstone repeater's block data specifies its orientation and delay.

This article may need cleanup to comply with the style guide. [discuss]
Please help the Minecraft Wiki clean up this page if you can.
The specific problem is: Render (And re-render already rendered with correct side textures) all states for every single side texture change before 1.5. Also, ambient occlusion. Also, MC-50242

Issues relating to "Redstone Repeater" are maintained on the bug tracker. Report issues there.