From Minecraft Wiki
Jump to: navigation, search
This article is about the ore. For the item, see Redstone Dust. For the powered mineral block, see Block of Redstone.
Redstone Ore 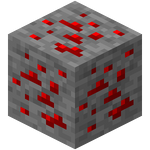 Redstone ore can generate in the Overworld in the form of mineral veins. Redstone ore attempts to generate 8 times per chunk in veins of size 1-8, from altitudes 0 to 15, in all biomes.

Redstone ore is commonly found in caves with lava pools as well as some Lapis Lazuli Ores. As of Java Edition 1.16.4, on average they generate 29.5 ores per chunk.

Redstone ore produces light (strength 9) and red particles when clicked, updated, or contacted by any mob (exceptions being a sneaking player and spiders). This effect continues until the redstone ore block receives a random block tick (averaging 68.27 seconds). This effect does not actually produce redstone power, but the block changes can be detected with an observer or a block update detector.

Redstone ore can be placed under note blocks to produce "bass drum" sound.

A redstone ore that glows and emits particles in the dark.