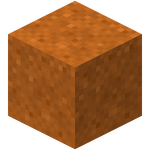 Sand is a block affected by gravity.

Red sand is a variation of sand that cannot be used to craft concrete powder.

Sand generates naturally in many biomes of the Overworld near lakes or ponds, notably deserts, beaches, and rivers, generally in four-block-deep layers supported by stone and sandstone. Sand also generates as the ocean floor of lukewarm oceans, warm oceans, and their respective deep variants.

Both types of sand can spawn floating in the air. The floating cluster of sand falls when one of the sand blocks receives an update (when a block is placed near it or when a block near it is broken).

If the block below either type of sand is air, it falls until it lands on the next available block. While sand is falling, it exhibits a smooth falling animation.

If falling sand lands and covers the head of a mob or the player, the mob or player buried in it continuously receives suffocation damage. If falling sand lands in the space occupied by a non-solid block (such as torches, slabs, rails, or redstone), it drops and turn into an item. If it falls onto a cobweb, it falls slowly until it has gone through completely; if it touches the ground while still inside the cobweb, it becomes an item.

Though TNT does not break any blocks when ignited underwater, if sand, concrete powder, or gravel is placed on TNT and the TNT is ignited, it breaks blocks when the sand falls on it.

Sand can be used in the construction of airlocks and mob suffocation traps. Being affected by gravity, it can be quickly and easily removed from ground level.

Issues relating to "Sand" or "Red Sand" are maintained on the bug tracker. Report issues there.