This article is about the GUI system for crafting. For the item, see Knowledge Book.

The recipe book is a mechanic in Minecraft that serves as a catalog of recipes and as a crafting, smelting, and banner patterning guide.

The open recipe book, as it appears in the survival inventory screen.

The recipe book as it appears in the crafting table screen.

The recipe book can be displayed in either the 2×2 (inventory) or 3×3 (crafting table) grids. Simply enter the crafting GUI and press the icon with the knowledge book; the recipe book is then displayed to the left. This also works in smelting GUI and loom. GUI brewing GUI.

Similar to Bedrock Edition's MATTIS system, the recipe book contains a list of all crafting recipes.

Using on an item shows all the patterns.

Clicking on an item in the list displays its crafting recipe in the nearby 2×2 or 3×3 grid. The item can then be crafted if the materials are available; otherwise, the button containing the item is highlighted red. Each click shows alternate patterns for the same crafting recipe, if there are several patterns (for example, each click on a banner recipe shows all the possible banners using different colored wools). Right-click on the item shows all the alternate patterns.

Shift-clicking an item in the list puts all available materials in the crafting grid.

The button in the top right corner of the recipe book toggles between "Show all" and "Show craftable"; the latter displays only recipes for which the player has the necessary materials in their inventory. The top-left corner also contains a search bar to further narrow the list.

The 2×2 recipe book displays only those recipes that can be crafted in the 2×2 grid; to see every possible recipe, a player must use the 3×3 recipe book. It doesn't work on a bone block

Recipes are unlocked upon meeting certain criteria (for instance, gathering materials, being near water, having a certain number of filled inventory slots, etc.) or by using a knowledge book. Using a crafting recipe also unlocks it, so long as /gamerule doLimitedCrafting remains false.

Recipes can also be given or taken away by using the /recipe command.

as those sections are at the top and not the bottom left. 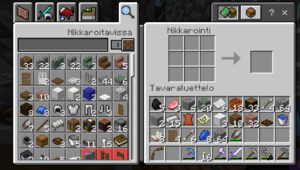 In this version, too, it’s pretty similar to the creative.

Issues relating to "Recipe book" are maintained on the bug tracker. Report issues there.