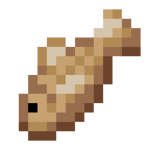 This article is about cod in its raw food form. For the cooked form of raw cod, see Cooked Cod. For the mob form of cod, see Cod. For other uses, see Fish.

Raw cod is a food item.

Guardians and elder guardians have a 40% and 50% chance, respectively, to drop raw cod when killed. In Java Edition, cooked cod is dropped if a guardian is on fire when killed.

Guardians and elder guardians also drop a 2.5% chance to drop a random fish, with 60% of them being raw cod. The chance of getting the fish drop is increased by 1% per level with Looting (for a maximum of 5.5% with Looting III), but the type of fish is not affected. Non-cod fish does not drop as cooked if the guardian or elder guardian was on fire.

Polar bears have a 75% chance of dropping 0–2 raw cod when killed. The maximum amount can be increased by 1 per level of Looting, for a maximum of 0-5 with Looting III.

Cod always drops 1 raw cod when killed. In Java Edition, if it is killed while on fire, it drops cooked cod instead.

When killed, dolphins drop 0–1 raw cod. The maximum amount is increased by 1 per level of Looting, for a maximum of 0-4 with Looting III. If killed while on fire, they drop cooked cod instead.

Raw cod can be used to tame cats with 1⁄3 chance of successful, get cats off of chests, and beds, breed cats, and make baby cats grow up faster by 10% of the remaining time.

Dolphins can be fed raw cod. Doing this improves their trust and interaction with the player. However, unlike most animals, feeding dolphins does not cause them to breed.

Fisherman villagers have 50% chance to sell 6 cooked cod for 6 raw cod and 1 emerald as part of their first tier trade.

Apprentice-level fisherman villagers have a 2⁄3 chance to buy 15 raw cod for an emerald in Java Edition, and always offer the same trade in Bedrock Edition.

In Bedrock Edition, raw cod can be used to feed wolves, heal them by 2

. However, unlike other wolf food, raw cod cannot be used to speed up the growth of baby wolves nor used to breed them, thus making it only feedable when wolves are not at full health.

Issues relating to "Raw Cod" are maintained on the bug tracker. Report issues there.