From Minecraft Wiki
Jump to: navigation, search
Not to be confused with cave. 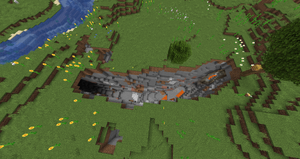 A ravine that generated in a desert.

A ravine is a deep, long crack in the ground.

Ravines are usually between 27 to 62 blocks in depth, 85 to 127 blocks in length, and typically less than 15 blocks wide. Ravines can have small ledges along the top. They can be found at levels 10 to 72, sometimes appearing on the world surface or underwater, forming canyons. They can go deep underground, sometimes spawning slimes or exposing diamond ore. If they reach deep enough, they may also be floored by the lava lakes at level 10. Ravines can cut from surface level all the way down to bedrock, especially noticeable in the Amplified world type.

Ravines can also be found in oceans or rivers having a waterfall from the river/ocean falling into them. Ravines can spawn in the ocean with magma blocks at the bottom forming bubble columns.

Ravines can connect to caves, dungeons, abandoned mineshafts, and any other generated structures. Due to the large surface area of their walls, ravines often have water and/or lava flowing down them (from springs in the walls, underground lakes, or openings to the sea). A ravine that intersects a river or frozen river cuts off the river with walls of stone to accommodate the ravine.

In Bedrock Edition, ravines almost always go all the way down to bedrock, which causes lava to generate at the bottom. This means ravines spawning in mountain biomes appear larger. Obsidian often forms at the bottom as water sources flow down into the lava. Because ravines reach below Y coordinate 15, it is possible to find diamond ore exposed near the bottom.

A lava ocean inside of a ravine.

Similarly to how water oceans replace all air blocks below a certain altitude on the surface, when deep enough in a ravine, all blocks that would generate as air instead generate as lava.

Issues relating to "Ravine" are maintained on the bug tracker. Report issues there.