From Minecraft Wiki
(Redirected from Rainfall)
Jump to: navigation, search 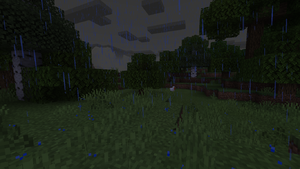 Rain is a type of weather that occurs occasionally in Minecraft.

Rain is a semi-common temporary, global occurrence[1] that can happen randomly at any time within the Overworld. In colder biomes, and at certain altitudes, it snows instead. In warmer biomes, and in other dimensions, it does not rain at all.

The average rainfall lasts 0.5–1 Minecraft day, and there is a 0.5–7.5 day delay between rains. Rain has a small chance to worsen into thunderstorms.

Thunderstorms can be skipped entirely with the use of a bed.

A heavy rain obscuring the distance. 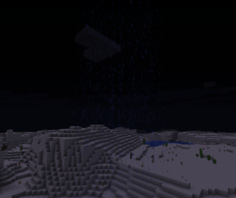 Rain in a small lake in a desert

The sun is not visible during rain although the sunrise afterglow is visible.

Rains darkens the world, causing the light from the sun to decrease by 3, bringing it to light level 12 in full daylight. Moonlight, however, is not reduced, and remains at light level 4. The sky itself darken (even in biomes where it does not rain), to the point where celestial bodies (the sun, moon, and stars) are no longer visible.[2] The clouds darken from white to a light gray, although clouds themselves do not precipitate. Although the sun is not visible during rain, the glow associated with sunrise and sunset is still visible.

Rain extinguishes fires (including flaming arrows[3]), although it does not extinguish lit campfires or fires on netherrack or magma blocks.[4] Rain does not solidify lava, and does not empty lava cauldrons in Bedrock Edition. Mobs on fire are quenched on contact with rain, preventing skeletons, strays, zombies, zombie villagers, drowned, and phantoms from burning during the day. During rain, drowned can leave bodies of water when chasing a target, as if it were night time. Endermen and snow golems may die due to their weakness to water; they take damage at a rate of 1

per half second. Endermen teleport randomly until they find a dry place. Blazes that are brought into the Overworld also die on contact with rain. Conduits are not affected during rain and thunderstorms.‌[Bedrock and Education editions only] [until BE 1.16.0]

At a certain biome-dependent elevation,[more information needed] the rain becomes snowfall, resulting in huge natural mountains having snow on the peaks while it is raining on the ground.

Other effects caused by rain:

Rain particles make noise when they hit a block, and this noise can be heard at any point within 16 blocks. These particles (along with the associated sound) can be disabled by setting Particles to "Minimal" in the Video Settings menu.‌[Java Edition only] Although rain particles are visible just in the immediate vicinity, its effects occur within all loaded areas. Note that raindrops fall only in the two middle lines of a block, thus do not visibly fall directly onto the player. At y=1 and below, rain does not generate particles and the associated sound event.

Issues relating to "Rain" are maintained on the bug tracker. Report issues there.

Rain falling into the void.