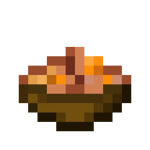 Rabbit stew is a food item that can be eaten by the player.

In Bedrock Edition, novice-level Butcher villagers always offer to sell rabbit stew for one emerald as their second trade.

In Java Edition, novice-level Butcher villagers have a 50% chance of offering rabbit stew for one emerald.

Rabbit stew can be eaten, and each bowl restores 10 (

) and 12 saturation points. This restores more hunger than any other food type in the game except cake, but has less saturation than a golden carrot or a steak.

Eating rabbit stew turns it into an empty bowl, similar to mushroom stew and beetroot soup.

In Bedrock Edition, rabbit stew can be used to feed wolves, healing them by 10

. However, unlike other wolf food, rabbit stew cannot speed up the growth of baby wolves, nor can it to breed them, thus making it usable when only wolves are below full health.

Issues relating to "Rabbit Stew" are maintained on the bug tracker. Report issues there.