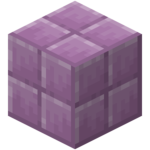 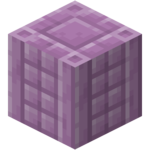 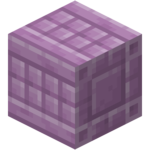 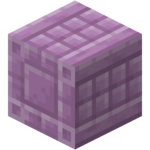 Purpur blocks and purpur pillars are decorative blocks that are naturally generated in end city dungeons and end ships in the End.

Chiseled purpur and smooth purpur are two further variants of purpur blocks exclusive to Bedrock Edition which can only be accessed by commands and appear identical to regular purpur blocks.

Purpur blocks and pillars can be mined using any pickaxe. If mined without a pickaxe, it drops nothing.

Purpur blocks and pillars can be found naturally as part of the structure of end cities and end ships.

Purpur blocks and pillars are primarily decorative blocks, similar to other brick-type blocks. They can also be used to craft different variants of the block.

In Bedrock Edition, purpur blocks use the following data values alongside more:

Issues relating to "Purpur Block" or "Purpur Pillar" are maintained on the bug tracker. Report issues there.