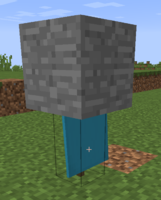 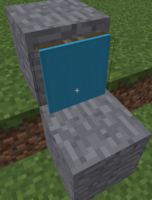 In Java Edition, using on a banner with a map selected places a marker of the banner's position on that map, and using again removes it. The marker has the same color as the banner's base without decorations. The marker is removed if the banner is destroyed unless the map is locked using a cartography table. If the banner is renamed, the name appears below the marker.