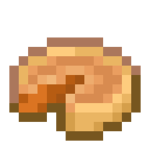 Pumpkin pie is a food item that can be eaten by the player.

Apprentice-level farmer villagers have a 50%‌[Bedrock Edition only] or 2⁄3‌[Java Edition only] chance to sell 4 pumpkin pies for an emerald as part of their trades.

To eat pumpkin pie, press and hold use while it is selected in the hotbar. Eating one restores 8 (

Placing pumpkin pie into a composter raises the compost level by 1.

Issues relating to "Pumpkin Pie" are maintained on the bug tracker. Report issues there.