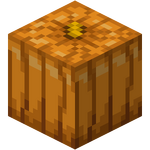 A carved pumpkin is a carved version of a pumpkin that can be worn or used to spawn golems. It can be made by using shears on a pumpkin placed in the world.

A pumpkin can be placed on top of a solid surface only, including transparent blocks such as glass. When placed, a carved pumpkin automatically faces the player.

A carved pumpkin can be equipped as a helmet without any actual armor value. It functions as a mask that allows the player to look at endermen without provoking an attack. When worn, it limits the player's viewing area to a mask pattern that resembles the pumpkin's carved face. The pattern does not appear in third person view.

This section is missing information about when were pumpkins changed to face away from the player upon placement? there were multiple such times (once in beta and once in 1.8 dev).
Please expand the section to include this information. Further details may exist on the talk page.