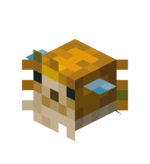 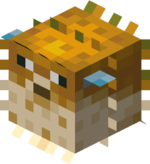 This article is about pufferfish in their mob form. For the food item, see Pufferfish (item). For other uses, see Fish.

Pufferfish are uncommon passive mobs found in oceans. They deal damage and inflict poison to nearby players and certain mobs, but do not become hostile.

Fish drop 1 of their item form when killed:

Pufferfish inflate themselves when approached by the player, most mobs, and armor stands.[2]

Like other fish, pufferfish cannot survive out of water. Outside of water, they flop around like guardians for a while until they start suffocating, and then die like squid. In Bedrock Edition they rotate when flopping. Fish cannot swim or breathe in cauldron water.[3]

A pufferfish inflates when approached by a player in Survival or Adventure mode, a drowned, or any non-water mob within a 5×5×5 volume around the fish, going from unpuffed, then semi-puffed, to fully puffed,‌[Java Edition only] or instantly to the fully-puffed state.‌[Bedrock Edition only] Pufferfish are technically passive mobs but going near one when fully puffed inflicts the player/mob with seven seconds of Poison, and touching one in its puffed or semi-puffed form deals damage separate from the poison. Pufferfish also instantly inflate to their fullest form after taking any kind of damage.‌[Bedrock Edition only] After inflating, they slowly deflate to their normal shape. Undead mobs are unaffected by the poison effect, but still take damage when they come into contact with pufferfish.

Pufferfish have additional entity data, beyond what other fish have.