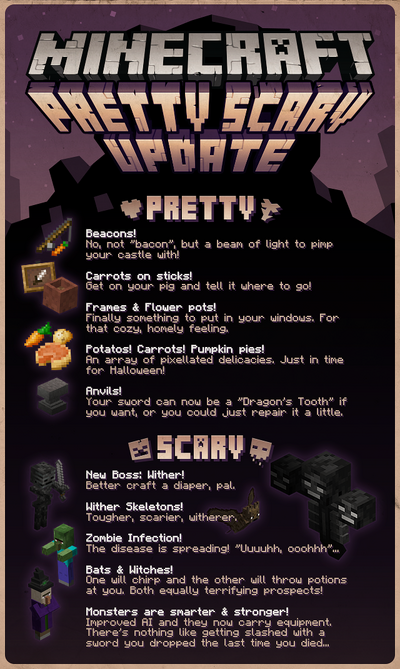 Promotional image (released alongside the update)[1]

The Pretty Scary Update is the name for Java Edition version 1.4.2, a major update officially released on Thursday, October 25, 2012.[2] Among the main changes were a number of new mobs and variants (witches, bats, zombie villagers, wither skeletons), wearable and placeable heads, a new boss (the wither), the command block, the anvil, the beacon, new food (potatoes, carrots and pumpkin pies), carrots on sticks for controlling pigs and new decoration items (such as item frames, flower pots and cobblestone walls).

The official name of the update was revealed at PAX Prime 2012 during the Minecraft panel, then later with snapshot 12w36a.[3] Dinnerbone first revealed the 1.4 release date with snapshot 12w40a, where he stated that he was fully into the "Prepare for release" mode.[4]

Mojang found a mob suffocation bug after this was released, and was forced to delay the launch by a day. The 1.4.1 Prerelease was unveiled on October 23, 2012,[6] and the release was pushed back a day.

Mojang then found yet another bug, and fixed "a severe memory leak in the server". This, as well as correct rendering of fences and cobblestone stairs, came in the 1.4.2 Prerelease, released on October 24, 2012.[7] 1.4.2 was the first official release of 1.4, available through the launcher on October 25, 2012.

A bug was introduced whereby a player could not achieve the The end? achievement.

The Pretty Scary Update was originally intended to include the Modding API, however this had been pushed to a later version.[8]

Lighting bugs present in 1.3.2 were only partially fixed. Dinnerbone first introduced changes in snapshots 12w39a/b. Dinnerbone tweeted to revert and push this to 1.5.[9][10]
Other changes postponed to 1.5 include redstone changes[11] and a rendering overhaul.[12][13]

A trailer documenting some of the Pretty Scary Update's major features was released on Mojang's official YouTube channel on October 26, 2012. The trailer was made by Hat Films, who have made update trailers for Mojang in the past.