From Minecraft Wiki
Jump to: navigation, search
This article is about the block. For the bucket, see Powder Snow Bucket. For other uses, see Snow (disambiguation).

This page describes content that may be included in a future update.
This content has appeared in development versions, but the full update containing it has not been released yet.
This content is locked behind the experimental gameplay option in Bedrock Edition.
Powder Snow 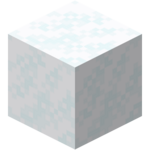 Powder snow is a trap block that, in Java Edition, can be obtained from cauldrons.

In Java Edition, a cauldron in a snowy biome will fill up with powder snow when it is snowing. Powder snow can then be picked up from this cauldron with an empty bucket.

In Bedrock Edition, the block form of powder snow can be obtained in Creative inventory.

Powder snow does not drop anything when mined, even with Silk Touch, and tools do not speed up mining.[1]

Powder snow will be broken by water or lava.‌[Java Edition only]

The frosty vignette when a player is within powder snow.

Mobs, armor stands or players wearing leather boots do not fall through powder snow. In this case the snow behaves as scaffolding when the player sneaks or crouches while on the block and jumps while inside of the block. In addition, fall damage will be taken when falling on powder snow from a large height.‌[Java Edition only][2]

Powder snow extinguishes any entities that are on fire if they go inside of it, including flaming arrows that are shot into it. Players can use powder snow in the Nether.

Being fully inside a block will cause a thick fog effect around the point of view.

Freezing hearts when the player is submerged in powder snow.

When an entity is inside a powder snow block, they will begin to freeze, taking damage.

When a player is submerged, they will see a frosty vignette slowly fade in at the sides of the screen and the FOV will slowly decrease. After fifteen seconds (300 game ticks), the player's hearts will change to a cyan frosty texture (

), and the player will begin taking damage at a rate of 1

HP every three seconds (60 game ticks). If the player leaves the powder snow block, the vignette will slowly fade away. When a player is frozen, they will move slower than usual until the vignette fully fades away. This is controlled by the "TicksFrozen" data tag, which increases by 1 every tick (to a maximum of 300) for an entity within the powder snow block. It will only decrease when the entity leaves the powder snow block, at which point it will decrease at a rate of 2 per tick. This is currently not a separate effect when used with commands such as /effect give freezing, and does not have its own unique art, particles or potion.

Wearing any piece of leather armor will stop the freezing effect and damage. This applies to entities that can wear humanoid-oriented armor, such as zombies. However, horses will not receive freezing resistance from leather horse armor, which has been confirmed to be completely intended.[3]

Cold-sensitive mobs, namely blazes and striders, are not immediately damaged by powder snow.[4] Mobs which inhabit cold biomes (as well as snow golems, which are themselves made almost completely of snow) are not immune to freezing.[5][6]

Issues relating to "Powder Snow" are maintained on the bug tracker. Report issues there.