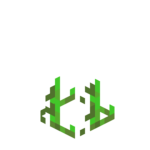 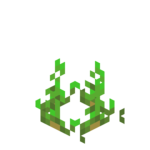 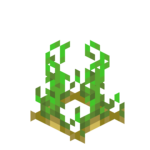 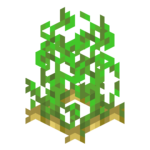 Potatoes are food items that can be planted, consumed raw, or cooked in a furnace or a campfire to make baked potatoes.

Zombies, husks, and zombie villagers have a 2.5% chance of dropping either an iron ingot, carrot, or potato when killed by a player or tamed wolf. This is increased by 1% per level of looting. This gives potatoes the following chances of dropping:

Village farm plots have a 20% chance of being potatoes.

When farmed, potatoes will take 8 stages to grow. However, there are only 4 distinct textures, so only 4 visible stages: every two stages have the same texture, except that growth stage 7 keeps the same appearance as stages 5–6, so that only stage 8 has the final, 'mature' appearance.

Fully grown potato crops drop 1 to 4 potatoes (about 2 5⁄7 per crop harvested on average) and have a 2% chance of dropping an additional poisonous potato. Potato yield can be increased using a tool enchanted with fortune. Bone meal can be used to mature the potato to its last stage of growth.

To eat a potato, press and hold use while it is selected in the hotbar. Eating a potato restores 1 (

Pigs will follow and can be bred by a player holding a potato.

Novice-level farmer villagers have a 25%‌[Bedrock Edition only] or 40%‌[Java Edition only] chance to buy 26 potatoes for an emerald as part of their trade.

Placing a potato into a composter has a 65% chance of raising the compost level by 1.

In Bedrock Edition, potatoes use the following data values:

Issues relating to "Potato" are maintained on the bug tracker. Report issues there.