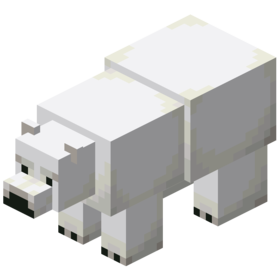 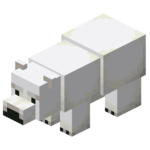 Polar bears are neutral mobs that live in icy biomes.

Polar bears are found in snowy tundra, snowy mountains and ice spikes biomes, in groups of up to four [up to two in Bedrock Edition]. If there is a group of two or more there is always only one parent, and the others are cubs. They can also be found in frozen river, deep and regular frozen oceans. Polar bears spawn at light level 7 or higher.

Polar bears can spawn on top of regular ice, but not packed ice or blue ice.

When killed, an adult polar bear drops one of the following:

Dropped fish is always raw, even if the polar bear is on fire when killed.

Like other baby animals, killing a baby polar bear yields no items or experience.

Polar bears can exist in a passive, neutral, or hostile state. The cubs are passive; adults are neutral. They become hostile towards the player if they get too close to their cubs (this does not seem to happen as fast on easy difficulty).

If a cub is attacked, all adults within a 41×21×41 cuboid become hostile towards the attacker, regardless of difficulty (although in peaceful difficulty, their attacks do zero damage to players). Attacking an adult who is within a 16×8×16 cuboid of a cub also provokes other adults within a 21×21×21 cuboid of the attacked adult.‌[Java Edition only] Polar bears can be accidentally provoked by other mobs.

Polar bears attack by rearing on their back legs and then mauling down on the victim with their front paws. Their swimming speed is equal to the player's, making them difficult to get away from if they are attacking in water.

Polar bears have entity data associated with them that contain various properties of the mob.

Issues relating to "Polar Bear" are maintained on the bug tracker. Report issues there.