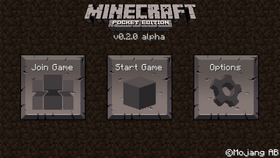 For a guide about all content in this release and the other releases of 0.2, see Bedrock Edition guides/0.2 releases.

v0.2.0 alpha was a major update to Minecraft: Pocket Edition. It added Survival mode as well as other changes and fixes. This version is the start of the Android and iOS devices having the same features cross-platform.

v0.2.0 alpha was reuploaded on Android later on February 11, 2012, to fix a major bug where some phones crashed while trying to create a new world. The internal versions for both builds are as follows:

A free J-version demo of v0.2.0 alpha was released on Google Play on an unknown release date. In mid-2014, it was removed from Google Play. The internal version is the same as the j-version.

Title screen of the lite version

A free Lite version was released on between February 17 and 20, 2012. In mid-2014, it was removed from App stores. The internal version is not currently known.