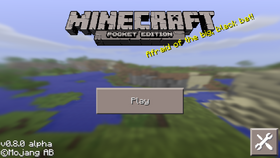 v0.8.0 alpha was a major update to Minecraft: Pocket Edition that was released on December 12, 2013. It added new blocks, items, crops and other features, as well as some changes and fixes.

32 issues fixed
From released versions before 0.8.0

From the 0.8.0 development versions