v0.2.0 alpha was a major update to Minecraft: Pocket Edition. It added Survival mode as well as other changes and fixes. This version is the start of the Android and iOS devices having the same features cross-platform.

v0.2.0 was reuploaded on Android later on February 11, 2012, to fix a major bug where some phones crashed while trying to create a new world. 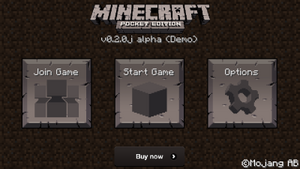 A free J-version demo of Alpha 0.2.0 was released on Google Play on an unknown release date. In mid-2014, it was removed from Google Play. (there's no download link, it can be lost)

Title screen of the lite version