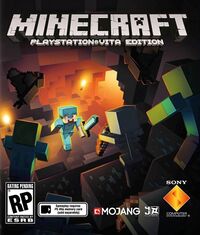 Minecraft: PlayStation Vita Edition is the edition of Minecraft for the handheld console PlayStation Vita in development by 4J Studios for and alongside Mojang Studios.[3] A hidden teaser was hinted by 4J Studios on Twitter in April 2014 where a PlayStation Vita displaying Minecraft in the background of the main focus of the image could be seen,[4] and a screenshot published a month later along with them confirming the edition was being developed.[5] Following the announcement, Jens Bergensten (Jeb) also added that it was based on PlayStation 3 Edition.[6]

PlayStation 3 Edition also has some level of connectivity with PlayStation Vita Edition; the game at the PlayStation Store incorporates the so-called Cross-Buy feature, which makes players get one of the two editions for free when purchasing either one of them. Saved worlds were also transferable between the consoles.[7]

PlayStation Vita Edition also uses ad hoc networking for "on the go" and online multiplayer, but instead of 8 players in one game, it supports up to 4 players.

PlayStation Vita Edition became available for purchase on the PlayStation Network on October 14 in North America and on October 15 in Europe.[8] It had a retail release in stores on November 11 (North America),[9] November 19 (Europe) and November 21 (United Kingdom and Ireland).[10]

This does not apply to PlayStation 4 Edition. It was only possible to do a one-way save transfer from PS3 to PS4. As of April 15, 2020, it is no longer possible to transfer saves from PS3 to PS Vita and vice versa.[12] There was also a major discount for previous owners of the PlayStation 3 edition, however, since February 25, 2016, there is no longer such a discount on PS4 Edition for owners of the PS3 Edition.