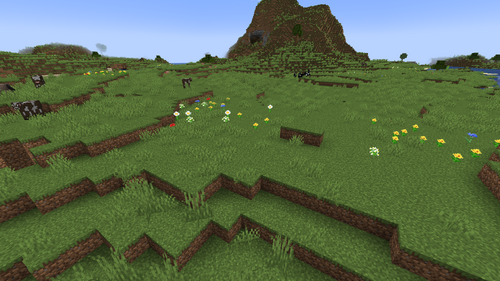 A plains biome. A pillager outpost can be seen close to a village.

Plains are temperate grasslands biomes. They are among the first biomes added to the game. There are two plains biome variants in the biome family. They are the second most common biome, with Forest being slightly more common.

Plains are grassy and mostly flat. Many of the grass blocks are covered in grass or tall grass. Oak trees generate sometimes; 1⁄3 are large. Rarely, these trees have bees and bee nests.

Some patches of plains grow various colors of tulips and these patches, along with flower forests, are the only places where tulips generate. oxeye daisies, cornflower, and azure bluets flowers sporadically generate within the plains. Sunflowers are found in the sunflower variation.

Villages from plains use oak planks and logs, and other villages across the world default to this plains style if their meeting points are generated in unusual biomes, such as rivers. Pillager Outposts generate as well, but are even rarer.

Horses spawn in plains biomes. In Bedrock Edition, this is the only biome where donkeys can spawn.

Despite the calmness, survival in plains biomes can be a little hard due to the relative sparseness of the biome, though villages can serve as a temporary refuge if they are found. Oak trees sparsely generate, making wood scarce should one not want to tear down village houses or battle pillagers in outpost for wood. Additionally, the amounts of grass can prove to be a nuisance when building a shelter or combating. However, tamed horses can serve as a method of travel, allowing players to more efficiently explore their surroundings for more resources.

There are two plains biome variants.

The plains biome is the most abundant variant. Plains biomes are commonplace in a Minecraft world, generating in temperate and dry biome clusters.

Typically found in large patches within regular plains, the sunflower plains features large numbers of sunflowers across its landscape, and is the only place where sunflowers may generate. The sunflowers make for a good source of yellow dye and a makeshift compass, as they always face east. The terrain and mob spawning is otherwise no different from the regular plains.