This article documents an April Fools' joke.
This feature was exclusively part of a joke version and is not currently planned for addition to regular Minecraft.
It is documented here on the wiki due to being officially-released content by Mojang Studios, even if not present in a final version.

You can help by expanding it.
Pink Wither 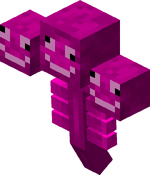 The pink wither or friendly wither was a recurring April Fools' mob present in both Java Edition 2.0 and 15w14a.

In 2.0, the pink wither could be summoned by placing a potted rose on top of pink wool. The newly spawned mob has one head.

The Pink Wither would follow players holding sugar, and feeding it said sugar would cause it to grow more heads, up to a maximum of three.

It would apply an effect similar to bone meal upon surrounding blocks, whose range would be increased by its head count. It would also heal surrounding mobs.

The mob is considered undead and classified as hostile.

In 15w14a, the Pink Wither replaces the Wither, firing skulls with a bone meal effect.

When spawned, the friendly wither has three heads like a normal wither. It also creates an explosion effect after spawning and has a shield after losing half of its health.

The skulls fired by the Pink Wither firing are the same as the regular wither's, but pink instead of black. The Pink Wither's skulls often heal the entities, but can damage them, too.[verify]

Unlike the Wither, Pink Wither does not drop a Nether Star upon death and doesn't break any blocks.

Needs revisiting
The NBT data listed is currently the current wither data, rather than the NBT the pink wither had in the updates it existed.