Pillar jumping (also known as pillaring, chimneying, towering, jump stacking, nerd-poling, piling up, or constructing a block elevator) is a method of reaching a higher altitude that can't otherwise easily be reached in a map. The pillars serve only the player creating them and are useless to others, unless a ladder is later placed on the side.

Pillars created in this way are useful in editing adjacent tall structures. However, they also cause the map to look unnatural, if they aren't destroyed after usage. They can also be used to get back up after going mining, and as a landmark indicator to help players find their way back to their houses. The latter is more useful if a torch, glowstone block, or lava source is placed on top.

As of 1.14, players can use scaffolding to create reusable and easily destroyable pillars. 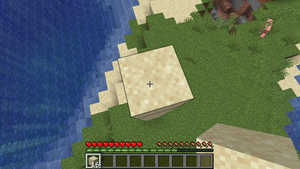 Player airborne, adding the next level

The following steps show how to pillar jump:

Once a pillar has been used once, they are no longer needed, especially on multiplayer servers. This is because of the fact that pillars cannot be climbed unless they are torn down and reconstructed. Because of this, and the fact that many players find that the pillars make the terrain look bad, it is recommended to take a pillar down after using it.

If the pillar is more than three blocks high, stepping off it will result in damage. If a player falls off a 4+-block pillar, any water underneath can prevent any fall damage that may be done to the player. Using a shovel to dig your way down is an efficient way to both clean up after yourself and prevent injury. Be careful using diamond shovel with high efficiency enchantment, as it destroys blocks faster than you fall. Digging a pillar is one of the few times when digging directly beneath your own feet is a good plan, because you know that there's nothing dangerous beneath you.

Removal can be accomplished with minimal effort if the pillars are made with a gravity-affected block such as gravel. The method involves placing a torch (or other similar blocks such as fences that have the same effect) on the ground, then directly above it placing a non-gravity-affected block such as dirt, and then building the column with the gravel on top of that block. When the pillar is no longer useful, the dirt can be removed, which will cause the gravel to fall onto the torch. This will cause all the gravel to rapidly disintegrate. However, doing this on a public multiplayer server can be dangerous, as another player can quickly kill you from fall damage if you are on top. You can also build it without the torch and dirt, by destroying the bottom block by hand and quickly placing a torch underneath the tower, and the blocks will appear as items the same way as previously.

Even without using the torch, sign, etc., it is beneficial to use a gravity affected block to make pillars, since when the player is done with them they can stand at the bottom of the pillar and delete it block by block, instead of having to start from the top and work their way down as they would have to do if they used a non-gravity-affected block.

Players can also build a pillar out of a flammable material such as wood or wool, then ignite it when it is no longer wanted, however this presents a number of problems. First is the possibility for unintentional spread of fire. Another is the fact that a block lit on fire is not guaranteed to burn away completely, which can lead to burning wooden blocks suspended high in the air (although this problem has been mostly resolved since the release of Beta 1.3). Since Beta 1.6, using fire to burn very high pillars is not recommended, as it can stop midway due to the nerfed fire.

Block jumping is similar to pillaring and also referred to as "block glitching", which is an easy way of traveling upwards. By block jumping, the player can easily reach very high places by jumping and placing a block underneath the player's feet while airborne. Block jumping is a form of glitch movement involving high connection pings or high lag rate, and is used as pillaring on multiplayer mode in areas the player cannot build in.

On most servers, there are protected areas in which the player cannot build or destroy. However, players can still reach high places in these areas by placing a block under themselves and quickly jumping off before it disappears. This can be repeated as long as the connection ping is high enough or the client's lag is high enough. A better way of block jumping that even works on servers with a very low ping is to jump next to a wall and place a block on the wall. By quickly jumping and placing blocks one after another in front of the player, they will be able to bypass the build protection used in servers. Using this way, the block the player is going to place is not contingent on the previously placed block.

This glitch is often used to complete challenges such as "jumping puzzles" to achieve false accomplishment and steal a prize or reward that was intended for a legitimate player. When a player attempts this glitch they are sometimes noticed and appropriate consequences may occur.

Most servers run anti-cheat plugins and most of these will detect block jumping as flying and will kick the player from the server or report the player to an admin. It is also not allowed on most servers and is referred to as an exploit by most people.