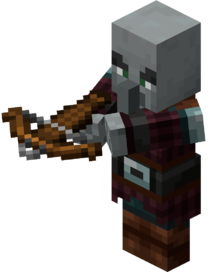 A pillager is an illager[1] equipped with a crossbow.

5 pillagers spawn in patrols. Patrols spawn naturally after 51⁄2 in-game days. They spawn only at night independently of structures, i.e. they still spawn in a world without generated structures.

Pillagers naturally spawn and respawn in outposts. They spawn in a 72×54×72 block area centered on the top floor (with the chest). Only pillagers and passive mobs may spawn in that area.

In Bedrock Edition, pillagers spawn at or below a particular location in the outpost, choosing the highest opaque block with a non-solid block on top and spawning on the northwest corner.

Pillagers spawn as part of raids, as the most common mobs in one.

A pillager is armed with a crossbow and shoots arrows at players, iron golems, snow golems, wandering traders and villagers. They shoot an arrow each 3 seconds up to 8 blocks away, following an enemy within 64 blocks. Pillagers never attack one another; even if one is shot by another pillager, it does not start dueling.

Pillagers use melee attacks when underwater.‌[Bedrock Edition only]

If raiding pillagers kill all the villagers in a village, the pillagers celebrate their victory cheering.

Their crossbows will eventually break unlike other mobs (like skeletons). They will keep shooting arrows until their crossbows break. When pillagers are unarmed in Java Edition, they are passive to everyone. This is extremely useful for creating iron farms that scare villagers using line of sight.

Passive pillagers can be obtained in survival using a few methods:

The following additional items drop from pillagers spawned by raids depending on difficulty (there is a 65% chance on easy and normal or an 80% chance on hard):

If the player kills a pillager wearing a banner on its head, the player receives the Bad Omen status effect. These pillagers are patrol or outpost captains.

Patrols spawn a single captain, while outposts can spawn 1-3 captains at a time. These captains give the Bad Omen effect at level I, whereas illager captains in raids do not give Bad Omen. The effect lasts for 100 minutes (5 days in-game) and stacks to a maximum of level 6 (without using commands), but can be removed by drinking milk.

The higher the Bad Omen effect, the higher chance of the crossbows of the pillagers being enchanted.‌[JE only]

Pillagers have entity data associated with them that contains various properties of the mob.

Issues relating to "Pillager" are maintained on the bug tracker. Report issues there.