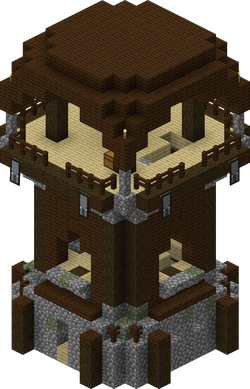 In Java Edition, pillager outposts never generate too close to, or within, villages. They can do so in Bedrock Edition as well generate far away from villages.

In Java Edition, if an outpost spawns in the water or in the air (e.g., spawning near a savanna plateau), then a platform of grass (or sand), dirt, and stone spawns underneath it in a circular shape. This also applies to the smaller structures such as tents, targets, log piles, and cages. On occasion, the smaller structures still spawn in the air despite having a platform below them, depending on how high up they are.

Iron golems spawn only during the generation of the outpost structures; however, both regular pillagers and pillager captains can continuously spawn in structures. In Java Edition they spawn in a 72x54x72 area centered on the top level of the watchtower, the same level as the chest. In Bedrock Edition, they spawn at or below a particular location in the outpost; specifically, they choose the northwest corner of the highest opaque block with a non-solid block on top.

In Java Edition, only pillagers and passive mobs may spawn within a pillager outpost spawn area. Pillagers may spawn on any valid opaque block as long as the sky light level is 11 or lower, and the block light level is 8 or lower, but can also spawn on grass or sand blocks regardless of sky light level. Therefore, players may pacify an outpost by removing all grass/sand blocks and properly lighting the area as they normally would to prevent enemy mob spawns.

Upon killing an outpost captain, the player receives 1 level of the Bad Omen effect applied to them for 100 minutes (5 in-game days).

This article may need cleanup to comply with the style guide. [discuss]
Please help the Minecraft Wiki clean up this page if you can.
The specific problem is: Incorporate most of the table below into the /Structure page

Structure blocks can be used to manually load pieces of the pillager outpost from the /data/minecraft/structures/pillager_outpost folder in minecraft.jar. To do so, set a structure block to Load mode, enter pillager_outpost/<structure_name>, and press LOAD.

In Java Edition each pillager outpost chest contains items drawn from 4 pools, with the following distribution:

In Bedrock Edition each pillager outpost chest contains items drawn from 4 pools, with the following distribution:

Issues relating to "Pillager Outpost" are maintained on the bug tracker. Report issues there.