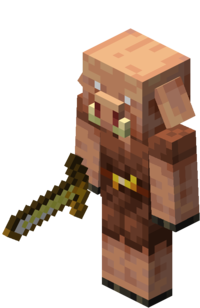 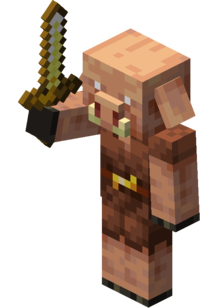 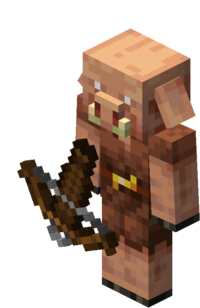 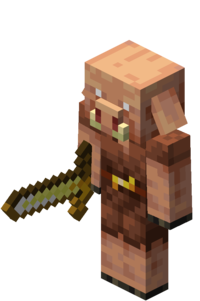 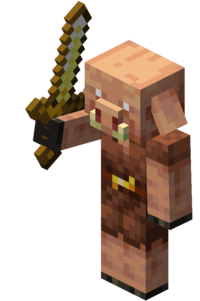 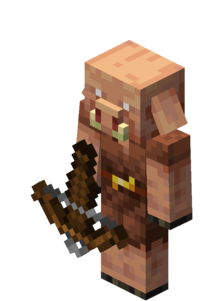 This article is about the hostile mob native to the Nether. For the zombified variant, see Zombified Piglin. For the hostile variant found in bastion remnants, see Piglin Brute. For other pig-like mobs, see Pig (disambiguation).

Piglins spawn in groups of 4 in nether wastes and crimson forest biomes, and within bastion remnants, at a light level of 11 or less in Java Edition, or 7 or less in Bedrock Edition, even in Peaceful mode. 5% of piglins spawned are babies.

A picked up item always drops without changing the durability.

Adults sometimes spawn with 1-4 pieces, which are normal or enchanted and may be:

These are dropped with an 8.5% chance and random durability.

Adults drop five points and more 1–3 per armor piece if killed by a player or tamed wolf. Baby piglins drop 1.

Piglins cannot swim, and drown if submerged, despite being living mobs; this is intentional behavior.[1] They are not naturally immune to fire or lava.

Piglins will pick up raw porkchops and cooked porkchops that are within 1 block from them, unless they've done so within the last 10 seconds.

Baby piglins are passive and play with baby hoglins, running around and playing with them. Up to 3 baby piglins may stack on top of each other while riding a baby hoglin.

Baby piglins can be given gold, but they cannot barter anything.

Adult piglins are hostile, but if the player is wearing at least one piece of gold armor, they become neutral. Piglins are provoked when players (with or without gold armor) attack them (including piglin brutes) or when a nearby chest, trapped chest, ender chest, minecart with chest, barrel or shulker box is opened or broken. Hoppers can be used to extract items from chests without aggravating them,[3]. Breaking gold blocks, gold ore, gilded blackstone, and nether gold ore also provokes them. If a nearby piglin brute targets a player, then any nearby piglins will turn hostile, even if the player is wearing golden armor and has not provoked the piglins. Piglins remain hostile for 30 seconds if the player provokes a piglin in these ways.

Breaking a bell does not provoke the piglins, despite piglins admiring them as gold.[4]

Adults attack wither skeletons, withers, and adult hoglins. If outnumbered by hoglins, they flee. After defeating a hoglin, piglins have a 10% chance to do a "victory dance" by bobbing their heads and sticking out their arms like a "T-pose."

Adult piglins group together within 16 blocks and attack in hordes.

When attacking with a crossbow, piglins shoot arrows every two seconds. In Java Edition, they walk backward (stopping if at the edge of a drop) as soon as the target is close. Their crossbow can break if it runs out of durability, making the piglins use their fists. Unlike mobs armed with bows, they do not strafe from left to right while shooting. Piglins with swords and other items rush at the player.

Iron golems attack both adult and baby piglins; however, piglins do not attack an iron golem without provocation.

Piglins briefly stop attacking when given gold items. If the player offers a gold ingot, bartering then takes place as it normally would if given a gold ingot. They resume attacking once the barter is complete. If the player distracts them with a gold item and equips a piece of gold armor while the piglin is examining the item, then the piglin ceases hostility.

Piglins trade gold ingots for certain items, when a gold ingot is dropped or the player uses it while looking at them. The piglin "examines" the ingot for six‌[JE only] or eight‌[BE only] seconds, then drop a random item from the chart. However, baby piglins examine the ingot and then run away without dropping an item.

Piglins can pick up and equip any items on their way, and prefers gold-related items by actively seeking them out. A piglin inspects any gold-related item before equipping, holding or putting that item in its inventory for six seconds after picking it up. However, items not related to gold are held or equipped (if the piglin does not have any gold equipments) instantly. Piglins do not pick up any items if the MobGriefing gamerule is set to false.

Piglins have eight hidden inventory slots in which they can stack items. Piglins with full inventories do not attempt to pick up gold related items, except gold ingots. Baby piglins attempt to pick up any item and can steal from players. Adult piglins can pick up gold nuggets (which do not help to obtain better items from bartering) and porkchops (they do not actively seek out and contemplate porkchops) and if either of those items is nearby, they instantly place it in their inventory. Piglins drop any of these items upon death aside from gold ingots, raw porkchops, and cooked porkchops.

Like other mobs capable of picking up items, piglins pick up armor and weapons. However, unlike other mobs, they prefer items in the gold tier or armor material, and throw away stronger items to equip these. 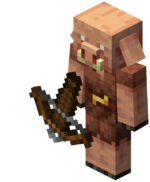 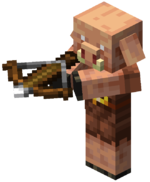 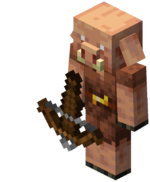 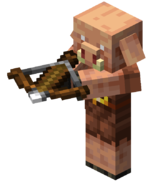 The differences of piglins targeting with crossbows between Java and Bedrock editions.