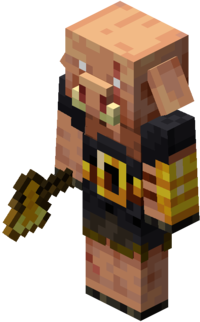 This article is about the hostile mob from bastion remnants. For the mob that can be bartered with, see Piglin. For other pigs, see Pig (disambiguation).

Piglin brutes spawn in bastion remnants only upon generation. Similar to elder guardians and shulkers, they do not respawn once killed.

Piglin brutes always spawn holding a golden axe. They do not spawn with armor and never equip armor from the ground.

Piglin brutes harm players, wither skeletons, iron golems (if provoked), and withers, and are not distracted by gold related items or blocks. In peaceful difficulty, piglin brutes do not attack in Bedrock Edition. In Java Edition, however, piglin brutes despawn immediately in peaceful difficulty. Piglin brutes do not retreat from soul fire related items, nor do they retreat from zoglins or zombified piglins. Unlike normal piglins, they do not attack adult hoglins, but they can join in if other piglins are hunting a hoglin. They also do not do a "victory dance".

Like piglins, piglin brutes can "hear" players through walls when they open containers (such as chests) and break gold-type blocks. They become hostile to these players, aggravating nearby piglins and other piglin brutes.

Like normal piglins, piglin brutes are not naturally immune to fire or lava.

Like villagers and piglins, piglin brutes can open wooden doors.

Piglin brutes do not pick up items off the ground, including armor and weapons. They also cannot be bartered with.

Issues relating to "Piglin Brute" are maintained on the bug tracker. Report issues there.