From Minecraft Wiki
Jump to: navigation, search
This article is about the hostile mob. For the zombified variant, see Zombified Piglin. For the neutral mob that can be bartered with, see Piglin. For other uses, see Pig (disambiguation).
Piglin Brute 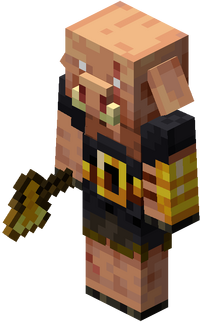 A piglin brute is a hostile, stronger variant of piglins that appears in all types of bastion remnants.

A small number of piglin brutes spawn in bastion remnants only upon generation and in some rooms, not having a baby variant.

A piglin brute has a chance of spawning holding an enchanted golden axe, without armor, and never equips armor from the ground.

Piglin brutes attack players, wither skeletons and withers within 16 blocks and are not distracted by golden items or blocks. They also attack any mob that attacks any piglin, or piglin brute. Examples include snow golems and iron golems, which piglin brutes only attack when a piglin or piglin brute is attacked.

Behaviors shared by both piglins and piglin brutes:

Like regular Piglins, Piglin brutes cannot swim, and will sink in water and eventually drown; this has been confirmed as intentional behavior.[1]

A piglin brute turning into a zombified piglin.

Piglin brutes have entity data associated with them that contains various properties.

Issues relating to "Piglin Brute" are maintained on the bug tracker. Report issues there.