Phantoms are undead hostile mobs that spawn when the player has not slept in over three in-game days. 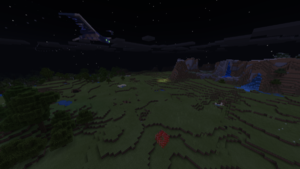 Phantoms spawn differently depending on the edition unless the game rule doInsomnia is set to false. In both editions, they spawn in the Overworld above the player if the "since last rest" statistic is at least 1 hour (72000 ticks or 3 in-game days). This statistic is reset when the player enters a bed or dies. Furthermore, the player must not have a block overhead that blocks light in any way (for example leaves prevent phantoms from spawning as they have a light opacity of 2, but glass does not, as its light opacity is 0). Phantoms will not spawn in spectator mode,‌[JE only] but they will spawn in creative mode.

Phantoms are counted toward the hostile mob cap, but don't adhere to it when spawning. Their spawning mechanic is based on the location of players in the world rather than by chance, unlike regular mob spawning. 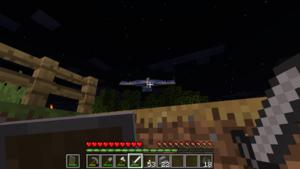 A phantom swooping at the player.

Phantoms are able to move through water at their normal speed, and cannot drown.

A phantom's body disappears when under the Invisibility effect, but its eyes and smoke particles are still visible.

Cats hiss at phantoms that are currently attacking players, and phantoms try to stay at least 16 blocks away from them. In Bedrock Edition, phantoms also avoid ocelots in the same manner.

Like other undead mobs, phantoms are harmed by the Instant Health effect, healed by the Instant Damage effect, immune to the Poison and Regeneration effects, ignored by the wither, and affected by the smite enchantment.

Phantoms have entity data associated with them that contain various properties of the mob.

Issues relating to "Phantom" are maintained on the bug tracker. Report issues there.

The red Phantom design was scrapped because it looked like a Nether mob.