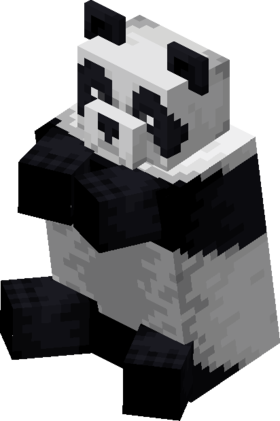 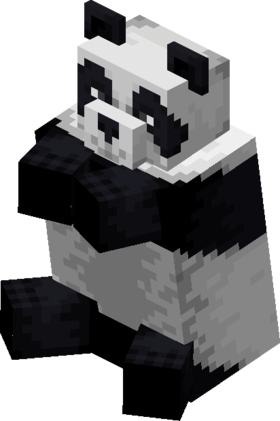 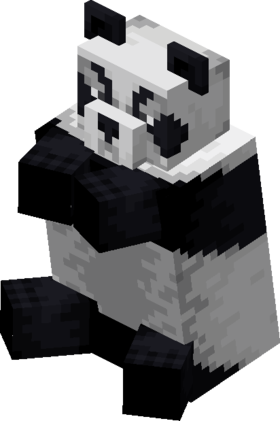 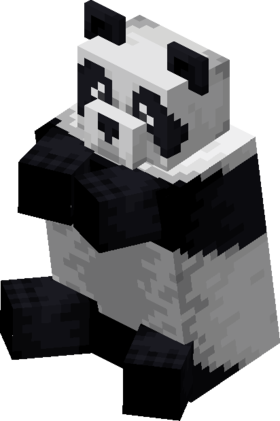 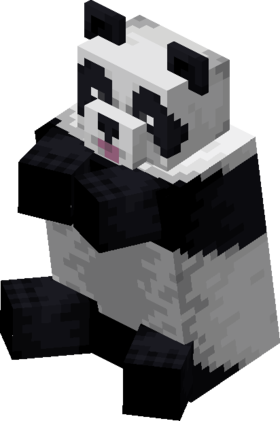 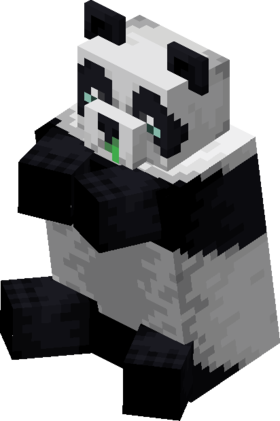 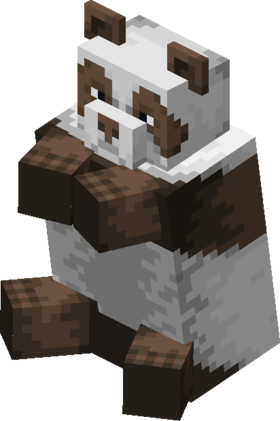 A panda is a rare passive mob that resides in jungles.

Pandas spawn in groups of 1–2 in jungle biomes at the surface on grass blocks with a (minimum) two-block space above them at a light level of 9 or more, but are rarer than other jungle mobs. They spawn with a randomized personality, with the normal one being the most common and the brown variant being the rarest.

5% of pandas spawn as babies.

In Bedrock Edition, pandas can spawn at light level 7 or above in jungle biomes and have a higher spawn rate in bamboo jungle biomes.

Pandas act similarly to other passive mobs; they wander aimlessly, avoiding falling off cliffs high enough to cause fall damage, and stay out of water or lava, unless they roll over an edge. They also move faster in water than other land mobs, similarly to polar bears. Pandas follow any player who is carrying bamboo and stop following if the player moves beyond approximately 16 blocks away. They also whimper if a thunderstorm is happening in the area. Adult pandas seek out bamboo and cake items to eat.

Baby pandas sometimes sneeze, which rarely drops a slime ball and makes nearby adult pandas jump. They also occasionally roll over and jump around.

Non-aggressive pandas become angry when hurt. When hit, a panda panics for few seconds before trying to attack the attacker only once, similar to llamas. Pandas have one private inventory.

Pandas can be ridden by baby zombie variants.‌[Bedrock Edition only]

If a panda is being attacked by a player near a villager, that villager will display angry particles.‌[Java Edition only]

The panda is the only animal to have extra breeding conditions. To enter love mode, there must be at least eight bamboo blocks within a five-block radius of both pandas. Once that requirement is met, feeding them bamboo causes them to mate, producing a baby panda. If a panda is fed without a sufficient amount of bamboo nearby, it sits and eats the bamboo, but does not enter love mode. Also, if the player feeds two pandas too close, they will instead bleat and become aggressive toward the player.

When two pandas breed, each one passes one of their genes to their children, who then randomly mix both obtained genes as their respective main and hidden genes. There is also a 1⁄32 chance for each gene of the baby to mutate into another gene. Mutations have different probabilities to mutate into the different genes, these probabilities can be found in the table underneath. These mutation probabilities also apply to spawned (not bred) pandas for their main and hidden genes.

The appearance of pandas depends on their personality:

Upon death, adult pandas will drop:

Baby pandas have a chance of dropping 1 slimeball when they sneeze.

Like other baby animals, killing a baby panda yields no items or experience.

Pandas have entity data associated with them that contain various properties of the mob.

Issues relating to "Panda" are maintained on the bug tracker. Report issues there.