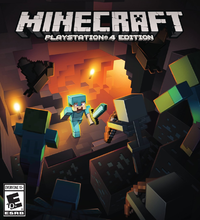 This article is about the Legacy Console Edition by 4J Studios. For the new edition for PlayStation 4, see Bedrock Edition.

The game is similar to PlayStation 3 Edition, but supports the enhancements offered by the PlayStation 4 (increased view distance, Small, Medium and Large worlds and DualShock 4 touchpad support). Worlds made on PlayStation 3 and PlayStation Vita editions could also be transferred onto this edition, before April 15, 2020. This allowed players to expand the world size of a classic sized world (one map).