From Minecraft Wiki
Jump to: navigation, search
This article is about the Bedrock Edition World type. For previous versions of the game, see Version history. 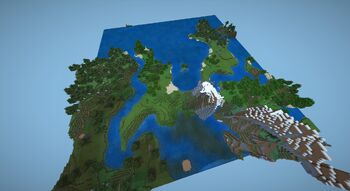 Overview of an Old world

Old is a world type exclusive to Bedrock Edition. The purpose of this world type is to provide smaller worlds on older or low-end devices that do not perform well with infinite worlds.

To create an Old World, simply select the "Old" type in the World Type drop-down of the world creation screen. Optionally, on low-end devices, toggle "Limited worlds" in the Video section of the options screen. This sometimes fails due to limited access. ‌[EE only]

Old worlds consist of a finite map with an area of 256×256 blocks with 128 maximum block height.

Biomes that cannot be generated in this world type:

However, as a result of their limited size, only a few biomes can be generated per world. Also, biomes that generate in here are shrunken 4× (16× area) to allow more biomes to generate. When creating an Old World, the player always spawns in the middle of the world. If starter map is enabled, the map is in scale level 1⁄4 rather than of 3⁄4. Additionally, the despawn radius during world creation or world edit can be up to 256 blocks, rather than up to 128 blocks as in flat and infinite.

Because of the player always spawning in the middle of the world, the center of the world is rarely at 0,0, meaning the game generates the full world in order to find a valid spawnpoint, then it limits the world to 256×256. It is possible, through NBT editing, to move the center of an old-world to another area in the seed.

Some generated structures never appear in the Old world type:

Other structures can generate in the Overworld:

Some mechanics break in this world type:

Due to the structure limitation in this world type, many resources become unobtainable in survival, and some mobs cannot spawn naturally.

Because of that, playing survival in this world type is challenging, due to the structure limitation reducing resources and also affecting mob spawning. While water always generates in this world type, lava likely does not. If the Overworld didn't generate lava, then cobblestone becomes nonrenewable without going to the Nether.

In Old worlds, the Nether and The End cannot be accessed unless the world is converted to the Infinite type, as detailed below.

However, the Nether and End actually exist in this world type but the only way to access these dimensions is via command /setblock or /fill with the corresponding portal, just like the Overworld.

Both Nether and End are also bordered with the size 256×128×256. The Nether still generates normally, but the 8:1 travel ratio is maintained, meaning that returning to the Overworld may cause the player to become stuck (due to the Overworld being 256×128×256 in size).

If a nether fortress is generated, it is most likely going to be cut down by the world border. Despite nether portals not being able to be activated, returning from the Nether to the Overworld causes a newly activated Nether portal to generate in the overworld (this is due to nether portals not counting when placed with commands).

The End in Old worlds generates only the central island without the outer islands. Sometimes the end fountain does not generate and the ender dragon sometimes gets stuck at the border. End gateway portals also don't work.

To convert an Old world to an Infinite type, select the pencil icon next to the old world in the world selection screen, then select "Make Infinite!". This creates a new world with all of the saved data (inventory, terrain, structures, etc.) of the old world, sets the world type to Infinite, and keeps the world name; the old world is then renamed <WorldName>-Old.

After converting to Infinite, the terrain copied from the old world has a terrain wall separating it from the added area, as infinite worlds generate larger biomes.

This act is impossible in Minecraft China.

Issues relating to "Old" are maintained on the bug tracker. Report issues there.