Ocelots try to spawn on grass blocks or leaves at sea level (y=63 per default) or higher in jungle biomes and variants in groups of 1 or 2. There is a 1⁄3 chance for a spawn attempt to fail. While ocelots are passive mobs, natural spawning considers the hostile mob cap rather than the much-lower passive mob cap.[1]

An ocelot has a 10% chance in Java Edition or 25% chance in Bedrock Edition to spawn as a kitten.

When an adult ocelot spawns, there is a 1⁄7 chance for 2 ocelot kittens to spawn with it; this chance includes any kind of spawning, including spawning naturally, by a spawn egg or a mob spawner.

The growth of baby ocelots is accelerated slowly using these raw fish. Each cod or salmon takes 10% off the remaining time to mature.

Upon death, adult ocelots drop 1–3 when killed by a player or tamed wolf.

Like other baby animals, killing a baby ocelot yields no experience. 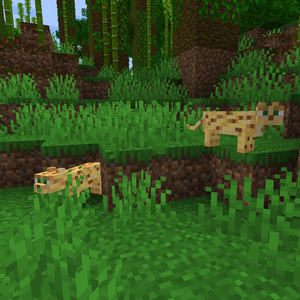 Ocelots attack chickens and baby turtles. They sneak and stalk the animal before chasing it down. They can kill through a fence or a door if they are against it.

Creepers stay 6 blocks from an ocelot. A creeper within this range that has begun its detonation does not flee unless the player leaves its blast radius.

Phantoms stay 16 blocks away from an ocelot.‌[BE only]

Ocelots are immune to fall damage; they still avoid falls.

Ocelots see players even with the Invisibility effect.

With the exception of a faster movement rate, kittens obey the same behavior as adults.

Ocelots are one of the few mobs that can sprint, and sprints away if the player approaches too near in Survival or Adventure modes. If enclosed, unable to escape, they wait until an exit becomes available, after which they quickly sprint through.

A player gains an ocelot's trust by feeding it raw salmon or raw cod until breeding particles show. When the player gains the trust of an ocelot, it no longer flees from the player. There's no need for the player to hold a raw fish once an ocelot trusts them as they don't run away from a trusted player.

Ocelots have entity data associated with them that contain various properties of the mob.

Note: This video is outdated as ocelots can no longer be tamed.

Issues relating to "Ocelot" or "Cat" are maintained on the bug tracker. Report issues there.